Iran's foreign minister has described the recent vessel explosions near the Emirati port city of Fujairah as ‘suspicious’, saying such moves in the Middle East are aimed at provoking tension in the region.

Mohammad Javad Zarif made the comment after meeting his Indian counterpart Sushma Swaraj in New Delhi on Tuesday.

“In the meeting, we discussed the existing concerns over suspicious moves and acts of sabotage in the region, and announced that we had already predicted such actions [would occur] to trigger tension in the region,” said the top Iranian diplomat.

The United Arab Emirates said on Sunday that four commercial vessels were targeted by what it called “sabotage operations” near the territorial waters of the country.

Later on Monday, the Saudi energy ministry said two of the vessels were Saudi oil tankers which have been severely damaged in the incidents. 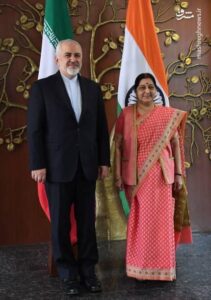 In his Tuesday remarks, Zarif said he has also discussed with his Indian counterpart the latest developments pertaining to the Iran nuclear deal known as the Joint Comprehensive Plan of Action (JCPOA) as well as Tehran’s actions in that regard.

“The Indian foreign minister and other sides also stressed the importance of Iran reaping the benefits of the JCPOA and called for necessary actions to be adopted,” said Zarif.

He said among the topics discussed were regional issues as well as the dangers facing the Middle East as a result of the policies adopted by radicals within the US ruling elite and in the region.