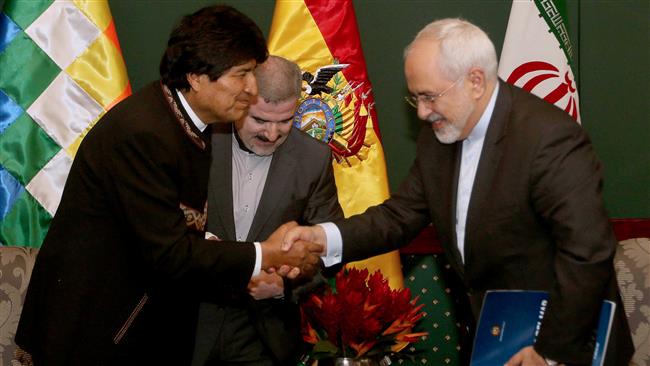 During the meeting in the Bolivian city of Santa Cruz on Friday, the two senior officials exchanged views about issues of common interest. Later in the day, the Iranian foreign minister and his Bolivian counterpart, David Choquehuanca, attended the opening ceremony of the first trade and investment meeting of Iran and Bolivia.

Zarif delivered a speech at the biggest economic meeting between the two countries in the presence of nearly 200 businessmen and economic activists of the Iranian and Bolivian state and private sectors.

Meanwhile, Iran and Bolivia signed a document for cooperation in the space sector in the presence of the two foreign ministers.

Zarif kicked off his six-nation Latin American tour on Monday at the head of a high-ranking politico-economic delegation comprising 120 businessmen and financial executives from government and private sectors. The tour started off in Cuba where he met with Cuban counterpart Bruno Rodriguez and the country’s President Raul Castro.

The Iranian foreign minister also paid visits to Nicaragua and Ecuador. He wrapped up his trip to Chile and arrived in Bolivia on Friday and will also visit Venezuela on the final leg of his tour.

The Bolivian president paid a visit to Tehran in November 2015 to attend the third summit of the Gas Exporting Countries Forum (GECF). The fourth GECF summit is due in Bolivia in 2017. Morales also met with senior Iranian officials including Leader of the Islamic Revolution Ayatollah Seyyed Ali Khamenei.