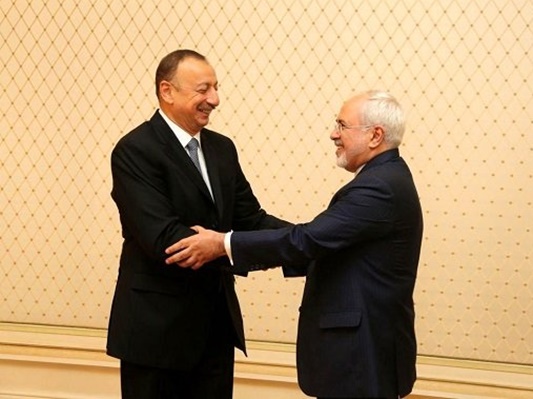 During the Friday meeting held in the Azerbaijani capital, Zarif and Aliyev conferred on bilateral relations between Tehran and Baku, and the tripartite cooperation between Iran, Turkey and Azerbaijan.

They also discussed joint fight against terrorism and extremism, railways, cooperation on Afghanistan, and the Astana talks on Syria.

The meeting was held on the sidelines of the international Heart of Asia Conference.

Zarif on Friday joined top foreign officials in Baku for the Heart of Asia Conference, which includes 14 participating and 17 supporting countries, as well as 12 international and regional organizations, such as the United Nations, the North Atlantic Treaty Organization (NATO), the Economic Cooperation Organization (ECO) and the Organization of Islamic Cooperation (OIC).

Speaking to reporters in Azerbaijan’s capital of Baku on Friday, Mohammad Javad Zarif said he has attended the Heart of Asia Conference as part of joint efforts to help ensure security and economic development in Afghanistan.

Iran maintains that any initiative for peace, stability and progress in Afghanistan and the battle against terrorism and narcotics in the country should be overseen by the Kabul government, he added.

Warning against the growing threat of the ISIS terrorist group in Afghanistan, Zarif expressed the hope that close international cooperation would help the Afghan government go through the current critical stage.