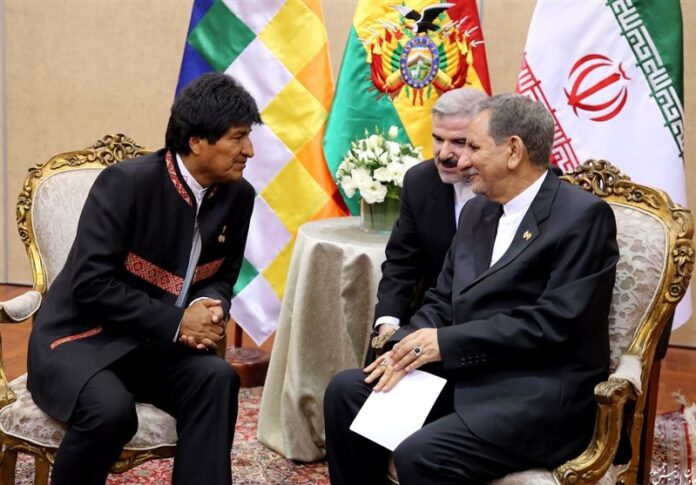 In a meeting with Bolivia’s president on the sidelines of the fourth summit meeting of the Gas Exporting Countries Forum (GECF) in Santa Cruz de la Sierra on Friday, Iran’s First Vice-President Eshaq Jahangiri said the Islamic Republic is ready to share its expertise in technological fields, as in nanotechnology, with Bolivia.

He also stressed the need for procedures for removing the obstacles to banking cooperation between Iran and Bolivia.

For his part, Bolivian President Evo Morales voiced his country’s willingness to take advantage of Iran’s experiences and advances in new technologies.

Pointing to the favorable results Bolivia has obtained from a number of dairy plants constructed by Iranian companies, Morales said the Latin American country is eager to promote cooperation with Iran in various fields.

Representatives of the GECF members have gathered in Bolivia for talks on the international gas market and production policies.

President of Venezuela Nicolas Maduro called for closer cooperation with Iran by strengthening partnership in the energy industry.

Cooperation between the Iranian and Venezuelan oil and gas companies could pave the way for the enhancement of bilateral ties between Tehran and Caracas, Maduro said in a meeting with Iranian First Vice-President Eshaq Jahangiri on Friday night (local time).

They met on the sidelines of the fourth summit meeting of the Gas Exporting Countries Forum (GECF) in Bolivia’s Santa Cruz de la Sierra.

Elsewhere in the meeting, the Venezuelan president pointed to the US “failed” policies against Iran, saying his country acknowledges the Islamic Republic’s role in regional stability.

For his part, Jahangiri voiced Iran’s readiness to provide Venezuela with experiences in different industries, in which Iran has made great advances in recent years.

He also noted that the US sanctions have helped Iran rely on its own capabilities and boots its domestic production to meet demands.

Iran and Venezuela enjoy a high level of diplomatic ties and are known as allies, as both are opposed to the US policies.

They have stepped up efforts in recent years to expand economic and industrial cooperation.