Iran, EU Reiterate Resolve to Bypass US Sanctions, Save JCPOA 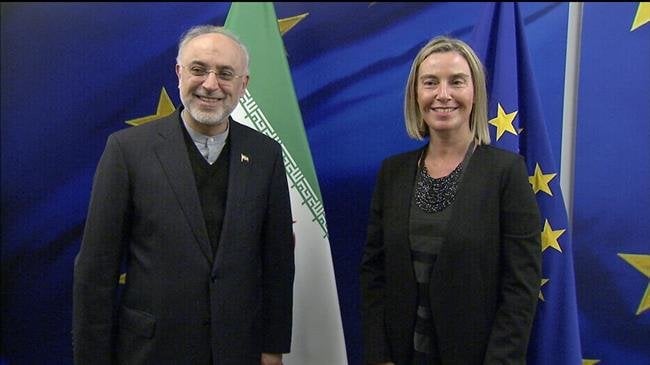 Iran and the European Union have once again stressed their resolve to keep the 2015 nuclear deal alive despite the unilateral US withdrawal from the international accord.

In a meeting in Brussels on Tuesday, Head of the Atomic Energy Organization of Iran (AEOI) Ali Akbar Salehi and the EU’s foreign policy chief, Federica Mogherin, agreed on the need for staying committed to the landmark agreement, according to a press release by the European External Action Service (EEAS).

“They re-affirmed their commitment to the continued full and effective implementation of the Joint Comprehensive Plan of Action (JCPOA) and took stock of the latest developments in this regard,” read the press release.

“They equally expressed their determination to preserve the nuclear agreement as a matter of respecting international agreements and a key pillar for the European and regional security,” it added.

During the meeting, which was held on the sidelines of the third EU-Iran High-level Seminar on International Nuclear Cooperation, Mogherini pointed to the continued cooperation between Brussels and Tehran concerning civil nuclear activities.

Back in May, US President Donald Trump pulled his country out of the JCPOA despite objections from the other signatories to the nuclear deal.

Since then, Washington has imposed “toughest ever” sanctions against Iran. It has also warned of severe penalties for the companies that evade the bans and engage in business with Iran.

The Trump administration had further vowed to reduce Tehran’s oil revenue to zero, but it went back on its pledge and gave waivers to almost all major customers of the country.

However, the European parties to the JCPOA have vowed all-out efforts to save the agreement and protect their firms in the face of American bans. They are now working to set up the so-called Special Purpose Vehicle (SPV) in a bid to circumvent the US sanctions against Iran and facilitate non-dollar trade with Tehran,

Prior to the meeting, the Iranian nuclear chief welcomed an EU plan to establish the SPV, but only if the payment mechanism system could preserve Iran’s oil sales.

Salehi, however, warned that Iran’s patience is running out as there has been no “tangible results” yet on the EU’s economic promises

Separately on Tuesday, Russian Foreign Minister Sergey Lavrov said Moscow and Paris share “common positions” on the Iran nuclear deal, calling on the remaining signatories to the accord to preserve it.

He made the remarks after a meeting with his French counterpart, Jean-Yves Le Drian in Paris.

“We want the remaining parties to the plan, including Iran and the three European nations (the UK, Germany and France), to stick to their liabilities under this major document and elaborate measures that will make it possible to keep the deal afloat after the United States’ unilateral withdrawal,” he said.