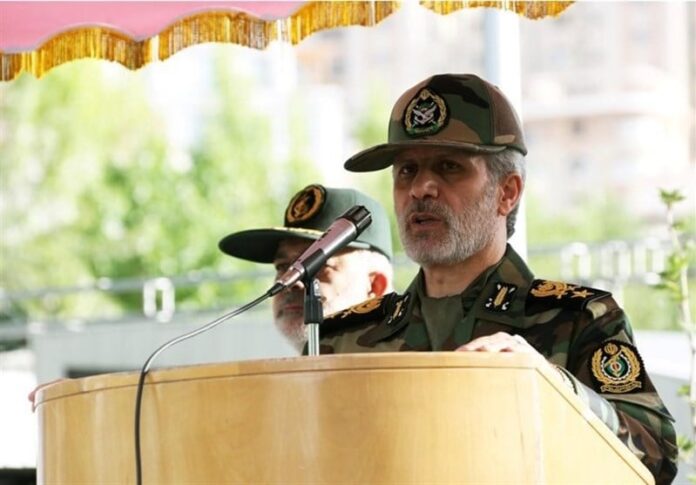 Iran’s Defense Minister Brigadier General Amir Hatami shrugged off US President Donald Trump’s recent calls for direct talks with Iran without “preconditions”, reminding that Washington brazenly reneged on the 2015 Iran nuclear deal that was the outcome of 12 years of negotiations.

“It is clear that this time, the enemy’s all-out war with the Islamic Establishment is political, economic, cultural and psychological,” Brigadier General Hatami said in a speech in the central province of Isfahan on Wednesday.

He further highlighted Washington’s non-commitment to its international obligations, including the nuclear deal known as the Joint Comprehensive Plan of Action (JCPOA) and said, “Twelve years of negotiation finally led to the JCPOA, which was also approved by the United Nations (Security Council), faced the Great Satan’s (the US’s) historic non-commitment.”

“All should learn a lesson from their (Americans’) irresponsible behavior and realize the depth of their hostility toward the great nation of Iran,” the commander added.

The comments came after US President Donald Trump last week voiced a willingness to meet with Iran’s leadership, without preconditions, “whenever they want.”

“I would certainly meet with Iran if they wanted to meet,” Trump said during a joint news conference at the White House alongside Italian Prime Minister Giuseppe Conte on July 30.

“I do believe that they will probably end up wanting to meet. I’m ready to meet whenever they want to,” he added.

“No preconditions,” he added. “They want to meet, I’ll meet, whenever they want.”

On May 8, Trump pulled his country out of the JCPOA, which was achieved in 2015 after years of negotiations between Iran and the Group 5+1 (Russia, China, the US, Britain, France and Germany).