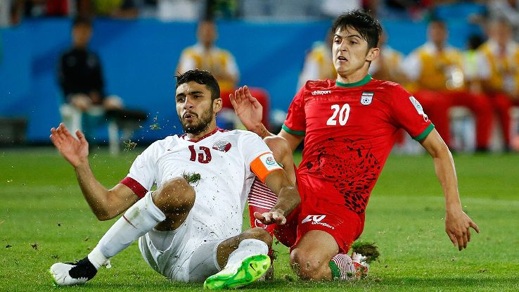 The National Iranian soccer team defeated Qatar 1-0 on Thursday to secure a place in the Asian Cup quarter-finals.

A solitary goal eight minutes into the second half was enough to send Iran and the United Arab Emirates through to the second phase with one game left to play in the group stage.

Iran’s win prevented the Qatar side from staying in the tournament. Qatar have only reached the quarter-finals twice in eight Asian Cup appearances.

In another match of the day, the UAE beat Bahrain 2-1, cementing their place at the top of Group C.

On Sunday, the three-time AFC Asian Cup winners Iran defeated Bahrain 2-0 in their Asian Cup opener in Melbourne while Qatar’s campaign was rocked by a 4-1 loss to the UAE.

The Iranian squad will line up against the UAE on Monday (January 19) and Qatar will take on Bahrain on the same day.

Iran are now second in the group standing.

In a press conference one day before the match, Iran’s national soccer team coach Carlos Queiroz said the match against Qatar would be a big challenge for Iran.

Prior to Thursday’s match, words spread that the Iranian team were not allowed to sport their white jerseys which bear an image of the Asiatic cheetah with some news agencies reporting that their jerseys have been stolen in Sydney.