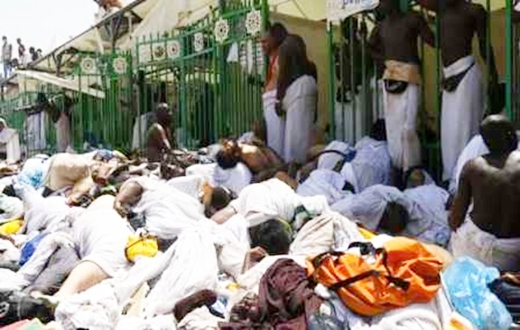 The Hajj and Pilgrimage Organization has announced that the number of Iranian pilgrims who died in the Mina stampede has increased to 136.

The death toll of the Iranian pilgrims died in the Mina stampede reached 136, Hajj and Pilgrimage Organization announced Saturday.

Based on the latest announcement, the number of the injured Iranian pilgrims increased to 102.

The number of missing Iranian pilgrims has been reduced from 354 to 344, it added.

The pilgrims were on their way to Jamarat to perform Hajj rituals there. The Stoning of the Devil is part of the annual Islamic Hajj pilgrimage to the holy city of Mecca.

It is one of a series of ritual acts that must be performed in the Hajj.

Based on the latest announcement by Saudi Arabia’s officials, the overall number of wounded pilgrims in the Mina incident stands at 4,000.

Many world experts, political and religious officials believe mismanagement was the real cause of the various incidents in this year’s Hajj pilgrimage, including the collapse of a huge crane, a fire disaster in a hotel, a fire which spread in the camp of the Egyptian pilgrims in Mina desert, and above all, the Mina stampede.