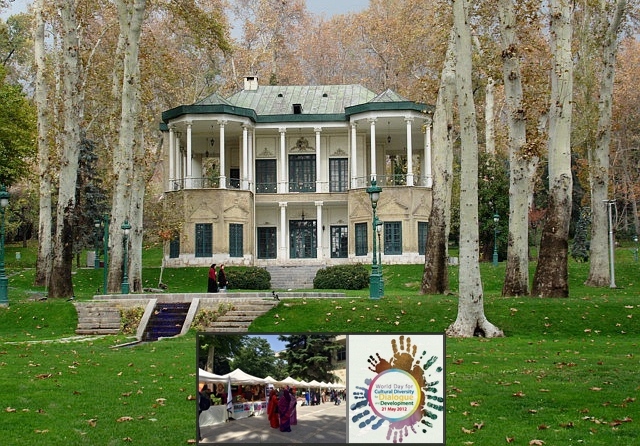 In a ceremony held in Tehran’s historical Niavaran Palace on Wednesday, Iran celebrated the World Day for Cultural Diversity for Dialogue and Development, which is annually marked on May 21.

Here is IFP’s translation of IRNA’s report about the ceremony.

Speaking at the ceremony, Deputy Head of Iran’s Cultural Heritage Organization Mohammad-Hassan Talebian referred to the coincidence of the World Day for Cultural Diversity for Dialogue and Development with International Museum Day, the beginning of Cultural Heritage Week in Iran, the 100th anniversary of the establishment of the first museum in Iran, and the 70th anniversary of ICOM (The International Council of Museums) establishment.

“ICOM’s motto this year is ‘Museums and Cultural Landscapes’, which shows how cultural heritage is dependent on the cultures of different nations,” the Iranian official noted.

He further underlined the need for respecting cultural diversity and different thoughts in the world, and described it as a global goal.

“Iran is a symbol of cultural diversity. People in Iran live together while they speak 50 different languages,” he added, referring to Semnan Province as an example, where six official languages are spoken.

“If we study this carefully, we will find that most of these languages have common roots, which shows our unity in diversity,” Talebian said, stressing that the diversity in Iran is attractive for tourists, and can make a great contribution to the country’s development.

“Since long times ago, members of all ethnicities and religions have been coexisting peacefully in Iran,” he went on to say.

The ceremony was organized by UNESCO in cooperation with the Non-Aligned Movement Centre for Human Rights and Cultural Diversity; the Iranian Cultural Heritage, Handicrafts and Tourism Organization (ICHHTO); the Iranian National Commission for UNESCO; and the embassies of Bangladesh, Mexico and Turkmenistan.

The grand celebration consisted of a series of cultural performances from Turkmenistan and different provinces of Iran, as well as a cultural exhibition and a traditional food festival with dishes from Bangladesh, Turkmenistan and the Iranian city of Rasht.

The open-air celebration was attended by Director and Representative of the UNESCO Tehran Cluster Office Esther Kuisch Laroche as well as many embassies, government officials, artists, NGOs and UN agencies, and was also open to the general public. Hundreds of tourists stopped by to visit the exhibition space and watch the cultural performances.

Jakov Kitarović, husband of the President of Croatia, Kolinda Grabar-Kitarović, also paid a surprise visit and attended part of the ceremony.

The culture exhibition, which took place alongside the ceremony, consisted of photos from Iran’s 19 World Heritage Sites, handicrafts from different parts of the countries, as well as cultural exhibitions from Bangladesh, Mexico and Turkmenistan.

In 2001, UNESCO adopted the Universal Declaration on Cultural Diversity and in December 2002, the UN General Assembly, in its resolution 57/249, declared May 21 to be the World Day for Cultural Diversity for Dialogue and Development.

The day provides us with an opportunity to deepen our understanding of the values of cultural diversity and to learn to live together better.