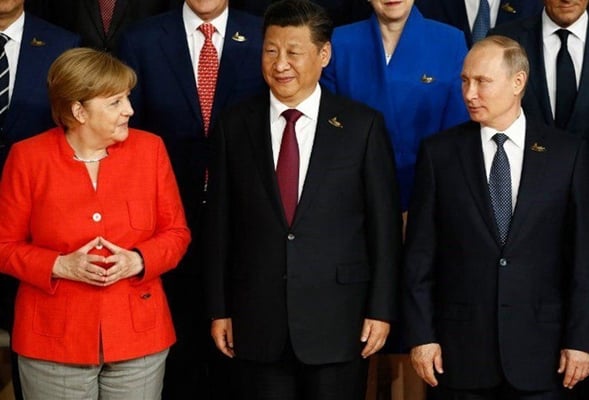 Upset by the US and its decisions, Germany may join an alliance between Russia and China, and this will provide Iran with a great opportunity to get rid of the nuclear deal, a report by an Iranian conservative website says.

The Tasnim News Agency, in a recent article, has weighed in on Europe’s possible course of action in the wake of Washington’s withdrawal from the JCPOA and whether or not the Europeans will be able to guarantee Iran’s interests under the deal.

The article specifically highlights the role Germany can play in securing Iran’s interests.

“The US does not take Germany seriously enough despite Berlin’s economic and technical power as well as its status in the European Union, and this is what upsets Germany,” has written in a recent report.

“The process to form an alliance between China and Russia kicked off 5 years go, and Germany will establish a close relationship with the alliance even if it cannot officially join it,” the report added.

“This triangle, with one weaker side, will provide Iran with new opportunities. If Iran takes those chances, there will be no need to follow Europe and launch a fresh and futile round of negotiations on dead-born JCPOA.”

The United States pulled out of the Iran nuclear deal upon an executive order by Donald Trump, setting in motion a fresh wave of speculations in different countries over the possibility of the agreement remaining in place without the US and with reliance on the potential of the three European countries (Germany, France, and the UK). The development has made it all the more necessary to conduct a precise technical evaluation of the European countries’ capabilities. Which one would show the nature of the signatories to the Iran nuclear deal: E3+3 or P5+1? Maybe neither. 2+1+2 offers the best description about the nature of the other parties to the nuclear deal that can play a part in the developments in the “post-JCPOA” era.

The P5+1 combination draws a line between Germany, the only non-nuclear power in the talks with Iran, and other parties. It is more of a legal classification, and, by no means, shows the nature of the countries Iran is dealing with.

2+1+2 is the best description about the nature of the countries Iran is dealing with, in the JCPOA:

1 = Germany – it does not benefit from getting on board with the US, and is leaning toward China and Russia, but is not powerful enough to change the game, either.

2 = France and Britain – these two countries have defined their policy in association with getting on board with the US, and neither, especially the UK, acts in Iran’s interests.

Der Spiegel wrote that German Chancellor Angela Merkel has warned about Europe’s heightened expectations in disputes with Washington over the nuclear deal with Iran.

She says European countries should not create the impression that they are stronger than they really are. She says Europe cannot present itself as the sole power seeking peace. Merkel says it should become clear to what extent it will be possible to support the Iran nuclear deal when the US, an economic heavyweight, is no longer involved. She has clearly said that Berlin cannot do anything in that regard.

German Finance and Economy Minister Peter Altmaier has also confirmed Merkel’s comments, saying the German government does not have what it takes to support German firms against the United States’ anti-Iran sanctions.

The German chancellor is scheduled to travel to Russia this week to sit down for talks with Russian President Vladimir Putin on the JCPOA. Both countries have underlined the need to preserve the nuclear deal despite Washington’s withdrawal from the agreement. Let’s not forget that Germany’s ex-Chancellor Gerhard Schröder created a European belt with the help of France and Russia against George W. Bush back in 2003 to prevent an attack on Iraq. However, his attempt proved futile, and the Moscow-Berlin-Paris axis collapsed. After that, Condoleezza Rice said Russia should be forgiven, Germany should be ignored and France should be punished. Now, will Germany be ignored like in 2003 if it opposes the US over the JCPOA, or will it be punished like France? Looks like Merkel prefers to avoid risks, and at the same time has a look at Russia’s positions.

With the US coming into play, the nature of China and Russia’s relations with economic and political heavyweights is a far cry from that in 2012 as Beijing and Moscow are openly under Washington’s economic pressure. In the past, Germany would thwart Washington’s anti-China plans by supporting China in the European Union, and showed in the 2003 arms-wrestling that it does not define its strategic interests “Atlantic-style.”

The US does not take Germany seriously enough despite Berlin’s economic and technical power as well as its status in the European Union, and this is what upsets Germany. UK-US ties, which are based on London’s financial profits and the US dollar, are irritating to industrial countries. These two countries are no better than their rivals in any industry, and have maintained their power through the “printing the dollar” doping technique and London’s money laundering.

The process to form an alliance between China and Russia kicked off 5 years go, and Germany will establish a close relationship with the alliance even if it cannot officially join it. This triangle, with one weaker side, will provide Iran with new opportunities. If Iran takes those chances, there will be no need to follow Europe and launch a fresh and futile round of negotiations on dead-born JCPOA. There are many ways to secure essential trade transactions, and the world is not limited to Western Europe and North America.

Establishing open banking relations with China and Russia and using those channels to engage with Germany, when necessary, is a clear and reliable solution to render sanctions ineffective. According to financial experts, the fact that it is impossible to ban financial transactions with China’s four main banks due to technical and not political reasons, the fact that it is impossible to slap sanctions on Russian banks due to geographical reasons, and etc. have provided Iran with more tools to neutralize Trump’s 1-0 game.

If Iran does not rely on solutions which have already proven ineffective, new horizons will open up before the country’s economy and foreign policy.