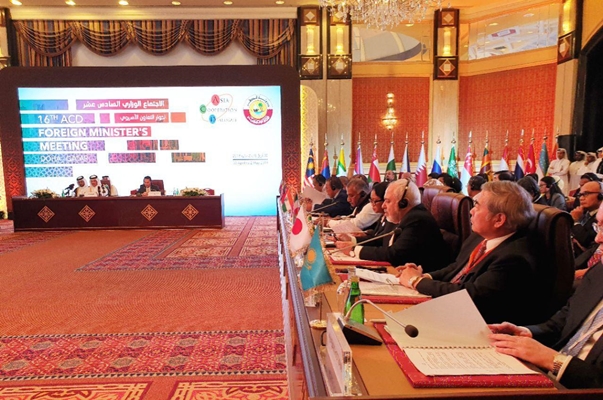 Iranian Foreign Minister Mohammad Javad Zarif has reiterated his call for the establishment of an inclusive regional forum for dialogue among regional states as the only way out of the current multidimensional crises.

Addressing the 16th ministerial meeting of the Asia Cooperation Dialogue (ACD) in Doha on Wednesday, Zarif said there is a “dialogue deficiency” in the region, which can be resolved by the establishment of a Regional Dialogue Forum in the Persian Gulf.

“Every player in our region should understand that we are neighbors forever, and that the only way to secure peace and prosperity is through the recognition of a common destiny. And an acceptance that inclusive multilateral dialogue is the only way out of the current multidimensional crises facing us all,” he added.

What follows is the full text of his statement:

It is a great privilege to participate in this important forum of our Dialogue. Allow me to take this opportunity to first express my appreciation to the government and people of the State of Qatar for organizing this event in their marvelous capital of Doha, and for their gracious hospitality.

Since 2002, we have worked together as the community of Asian Cooperation Dialogue and have exhibited the spirit of amity in pursuit of a prosperous, functional and inclusive multilateral framework. The Islamic Republic of Iran views the Dialogue as a significant achievement of our continent, and is determined to promote its lofty values and develop its practical agendas envisioned in the ACD Vision for Asian Cooperation 2030, the ACD Blueprint for 2017 -2021, and the ACD Summit Declarations.

Embracing the aspirations of our peoples for a peaceful and prosperous region, my country has utilized all its capacities and advantages in national, regional and international arenas to move towards Pan-Asian Cooperation 2030 and building the Asian Community. In this regard and as the “Prime Mover of Culture and Tourism”, we have initiated and implemented various programs, events and projects to foster mutual understanding among our nations and to make Asia a prime, sustainable tourist destination: They include organizing a grand festival celebrating Hamadan as Asian Capital of Tourism (ACT), and conducting various cultural activities through the ACD Cultural Center in Tehran.

The position of the Islamic Republic of Iran on the North-South and East-West transit corridors—along with a well-developed transportation infrastructure—plays a crucial role in connecting members of our community to other regions and contributing to the “Pillar of Connectivity” of our forum. Conclusion of various transit agreements, including the Agreement on International North- South Transit Corridor, Ashkhabad International Transit Agreement and Chabahar Trilateral Agreement, along with bilateral arrangements, are all among the instruments that are promoting our shared target of connectivity.

Moreover, building upon our experience of hosting the Asian Clearing Union, a similar financial mechanism will become operational within the D-8 Organization to facilitate financial transactions between member states utilizing national currencies. We believe that the same arrangement can be adopted by the ACD in order to create institutional connectivity for an enabling business environment, and to reduce administrative and regulatory business roadblocks.

Asian culture is imbued with noble values such as moderation, wisdom, inclusiveness, and peaceful co-existence. Our cooperation for the promotion of human prosperity and dignity affects not only Asian politics but reverberates in global politics through various multilateral arrangements.

For example, multilateral mechanisms such as ECO, D-8, IORA, ASEAN, Shanghai Cooperation Organization, and SAARC can help promote the ACD’s objectives; individually or in an inter-agency context.

For ACD to play its constructive role and materialize its objectives, a functional, professional and well-represented Secretariat is of vital importance. As such, a working group of interested member states should be established to discuss ways and means of strengthening ACD through reform or restructuring.

Our continent in general and West Asia and the Persian Gulf region in particular are undergoing crises caused primarily by the lack of inclusive regional dialogue coupled with short-sighted adventures and the aggressive unilateralism of the current U.S. administration.

To address dialogue deficiency, I have for some time proposed the establishment of a Regional Dialogue Forum in the Persian Gulf. Every player in our region should understand that we are neighbors forever, and that the only way to secure peace and prosperity is through the recognition of a common destiny. And an acceptance that inclusive multilateral dialogue is the only way out of the current multidimensional crises facing us all.

We also need to collectively address the alarming unilateralism of the current U.S. administration. The imposition of the will of a single power over all other nations is an existential threat—sooner or later—for everyone. Unless we align our capabilities to secure multilateralism, a rising and aggressive unilateralist wave can cover the entire world, quickly replacing the rule of law with the rule of the jungle.

Let me assure you that in the relentless pursuit of dialogue and multilateralism, Iran will always be a steadfast partner.