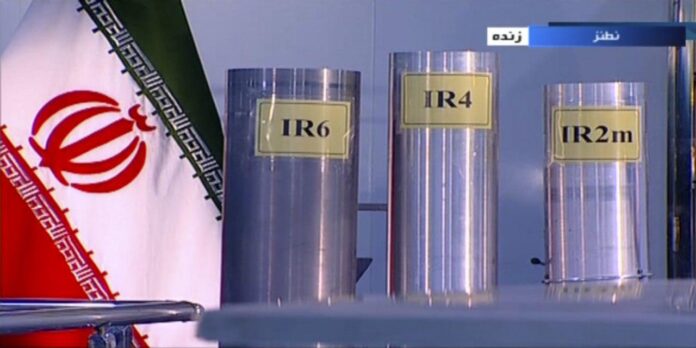 Iran has begun injecting uranium gas into the sixth generation of its homegrown centrifuges assembled in a new chain at the Natanz nuclear site.

In a ceremony at the Natanz enrichment site in central Iran on Monday, Head of Atomic Energy Organization of Iran (AEOI) Ali Akbar Salehi unveiled a chain of 30 IR-6 centrifuges and inaugurated the process of injecting uranium gas into the machines.

Salehi said the nuclear site includes a sector, called S8, where the new centrifuge machines undergo various tests, such as mechanical stabilization tests, before being installed in the main section.

According to the AEOI chief, the local experts have installed 15 new generation centrifuges at the research and development site over the past two months alone, increasing the uranium enrichment capacity by more than 2,660 SWU (Separative Work Unit).

Salehi noted that Iran’s uranium enrichment capacity has now reached 8,660 SWU, and the output of enriched uranium, which stood at around 450 grams per day before Iran’s third step in reducing the JCPOA commitments, has jumped 10 times, surpassing 5,000 grams a day.

The AEOI director added that the number of Iran’s IR-6 centrifuge has reached 60 with a total capacity of 600 SWU.

Salehi noted that Iran’s uranium enrichment capacity over the past two months has come closer to the numbers before implementation of the JCPOA.

Iran’s operational enrichment capacity was around 11,000 SWU before the JCPOA, while it has reached 8,600 SWU following the third step in reducing the JCPOA commitments.

The nuclear chief explained that Iran now possesses a total of 490 new centrifuges with a total enrichment capacity of 2,660 SWU.

An obvious sign of Iran’s steady progress in the nuclear industry is that it has diversified the centrifuges, Salehi stated, citing 15 different types of centrifuge machines after the third step of reduction in the JCPOA commitment. “Before the JCPOA, we had only five types pf new generation (centrifuge) machines.”

In August, Salehi said Iran was dynamically advancing its civilian nuclear program after launching a plant that can manufacture dozens of advanced centrifuges on a daily basis.