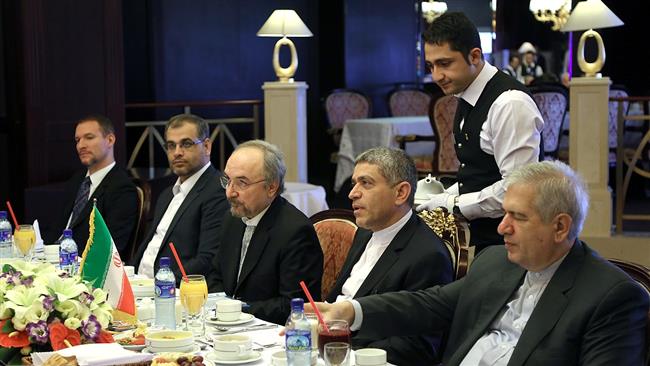 Iran’s minister of economic affairs and finance has said that Tehran and Vienna are planning to triple the volume of their bilateral trade in the near future.

Ali Tayyebnia made the remarks on the sidelines of a meeting with the visiting Austrian Vice Chancellor and Minister of the Economy Reinhold Mitterlehner in Tehran on Tuesday.

“At present, the volume of trade between Iran and Austria stands at $300 million and the two sides decided during this meeting to increase the figure to $1 billion,” Tayybnia added.

According to Tayyebnia, the two sides also discussed the issue of delayed payments between the two countries’ banks, adding, “One of the issues we discussed during this meeting was how to settle these delayed payments, which are mostly due to conditions brought about by anti-Iran sanctions.”

The Iranian minister stated that the meeting can be a turning point for further expansion of economic and trade cooperation between Iran and Austria.

He also expressed hope that with the removal of sanction following the recent nuclear agreement between Iran and P5+1, existing restrictions against Iran’s foreign trade would be lifted and the country would see a sharp increase in its trade exchanges with the rest of the world.

Tayyebnia said Iran has offered diverse investment projects to the Austrian side, some of which have been accepted and negotiations are underway on their implementation.

The Austrian minister, for his part, said his country is willing to see sanctions imposed on Iran removed in the shortest possible time in order for the two countries to implement projects on which they have agreed.

Mitterlehner added that Austria enjoys vast potential in transportation and steel production and can invest in these fields in Iran.

“We believe that the two sides have serious determination to bolster their ties. Relations with a country like Iran are of high importance to us and the only problem that exists has to with the difficulties associated with monetary exchanges and banking cooperation,” he added.

The Austrian official expressed hope that removal of sanctions would enable the two countries to solve the current monetary and banking problems in the near future.