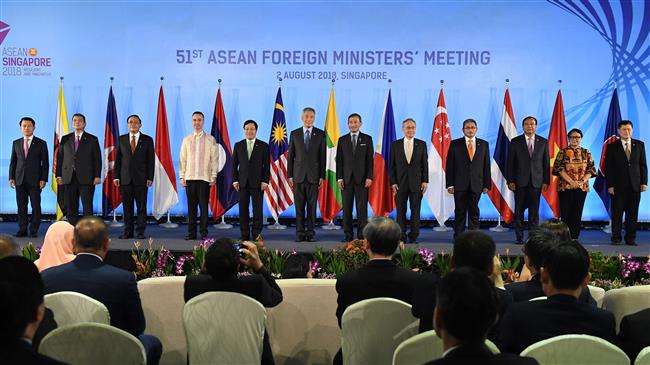 Iran has signed a friendship treaty with the 10-nation Association of Southeast Asian Nations (ASEAN), in a move which could lead to broader economic cooperation between the Islamic Republic and the organization’s member states.

Iranian Foreign Minister Mohammad Javad Zarif signed the Instrument of Accession to the Treaty of Amity and Cooperation (TAC) in South East Asia at the annual gathering of ASEAN’s foreign ministers in Singapore on Thursday.

The treaty comes only two months after US President Donald Trump pulled his country out of an international nuclear agreement with Iran and announced that he would re-impose economic sanctions that were largely lifted under that deal.

Nevertheless, experts believe that Asian countries are likely to brush off US sanctions and maintain business ties with Iran despite Washington’s pressure to harm all trade ties with the Islamic Republic.

At Thursday’s meeting, foreign ministers of the ASEAN member states as well as ministers of the observer countries, including Iran, Russia, China, and India, are scheduled to discuss the latest regional and international developments during the 51st session of the 10-nation bloc.

Related meetings involving ASEAN members and their partner countries will run until Saturday.

On the sidelines of the event, Zari held separate meetings with Singapore’s Prime Minister Lee Hsien Loong as well as his Philippines, Japanese and Turkish counterparts for talks on bilateral ties as well as regional and international issues, including the Iran nuclear agreement.

The Iranian top diplomat is scheduled to meet his Russian, Malaysian and Indonesian counterparts later today.

The bloc seeks to enhance intergovernmental cooperation and facilitate economic, political, security, military, educational, and socio-cultural integration amongst its members and other Asian states.