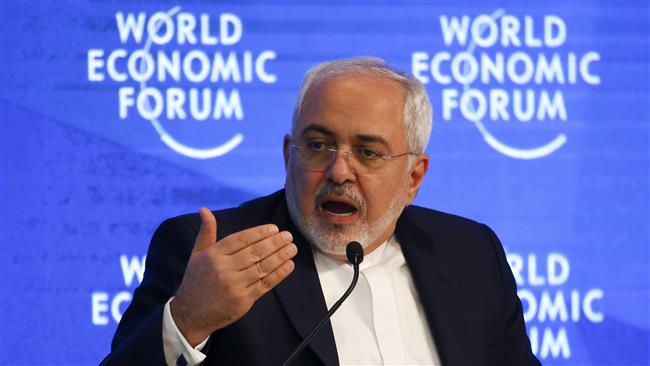 Iran and Saudi Arabia can work together to help end regional conflicts, but Riyadh needs to see the realities on the ground before relations between the two countries could go back to normal, the Iranian foreign minister says.

“I don’t see any reason [why] Iran and Saudi Arabia should have hostile policies towards each other. We can in fact cooperate for future stability of our region. We can in fact work together to put an end to [the] miserable condition of people in Syria and Yemen and Bahrain and elsewhere in the region,” Mohammad Javad Zarif told the World Economic Forum (WEF) in Davos, Switzerland, on Wednesday.

Zarif added that Iran and Saudi Arabia were able to “stop impeding the process of the presidential election in Lebanon,” stressing that the same can be applied to other issues of mutual interest.

He, however, said that Iran had a lot of grievances, including the loss of over 460 Iranian pilgrims in a tragic crush during the Hajj rituals in September 2015, which he said was caused by “negligence” and Saudi officials’ anti-Iran rhetoric.

“We have seen a lot of rhetoric from Saudi Arabia… interesting comments from my colleague, the foreign minister of Saudi Arabia, which considered Iran responsible for ISIS, which is the joke of the century,” Zarif said, adding that Riyadh needed to see the realities on the ground and the fundamental reasons behind the current problem gripping the region instead of pointing the finger of blame at others.

The top Iranian diplomat said that “nobody can derive any benefits even temporary benefits from supporting terrorism and sectarianism.”

“Once we understand that we cannot contain terrorism in one part of our region, and that terrorism and extremism are like contagious diseases that will spread throughout the region, throughout the world before we know it — and it is happening right now — then Iran and Saudi Arabia can start to think about different modus operandi for their relations,” Zarif said.

In his address to the WEF, the top Iranian diplomat also touched on the situation in Syria, and lauded a cessation of hostilities that has been holding in the Arab country since last month.

He said the upcoming talks on Syria in the Kazakh city of Astana would be aimed at expanding the ceasefire agreement in the conflict-hit country.

“[What] we need to do at the international level is to help the Syrians reach the stage of starting to talk to each other, and I believe the first step has been taken by Iran, Russia and Turkey in bringing about a cessation of hostilities” that has been holding for “over a month and that is the best record that is available in the past five… years of [the] Syrian conflict.”

“We hope that in Astana, this can be expanded, we hope that the ceasefire [will] incorporate all of Syria,” he added.

Zarif also warned against jumping to any conclusions before the start of the negotiations in Astana.

“We should not try to prejudge the outcome of political negotiations before we even start political negotiations. What is important for everybody is to recognize there is no military solution in Syria,” he said, expressing hope that all the parties that signed the Syria ceasefire agreement “will come to Astana with a view to ending hostilities for a longer term and also starting a political process.”

Astana will host the negotiations between representatives from the Syrian government and armed opposition groups on January 23.

The ISIS and Jabhat Fateh al-Sham Takfiri terrorist groups are excluded from the talks that are to be mediated by Russia, Turkey, and Iran.

The three countries successfully implemented a similar accord in December last year, following the defeat of militants in the Syrian city of Aleppo.

Zarif said the Astana talks would discuss the principles of a peace process based on Syria’s unity and territorial integrity as well as an inclusive government, but he stressed that only the Syrians must determine the future fate of Syrian President Bashar al-Assad.

Trump to be ‘surprised’ if JCPOA undone

Meanwhile, Zarif warned US President-elect Donald Trump against trying to renegotiate the Iran nuclear deal, known as the Joint Comprehensive Plan of Action (JCPOA), which was signed between Iran and the five permanent members of the UN Security Council plus Germany in July 2015.

The Iranian foreign minister told a panel at the Davos event that he was taking a “wait and see” attitude about the Trump administration, adding that it “won’t be the end of the world if he (Trump) tries to walk away from the deal.”

“He wants to surprise people, so he will be surprised,” if he does, Zarif said, without elaborating.

He also criticized the Obama administration, saying it “did not implement their side of the bargain in a full and complete way.”

During his election campaign, Trump threatened that he would “tear up” the JCPOA or try to renegotiate its terms if elected president. He has also referred to the nuclear agreement as “the worst deal ever negotiated.”