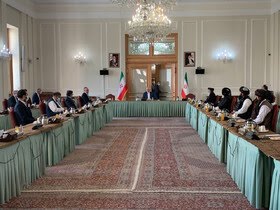 The Intra-Afghan Dialogue Summit, hosted by the Islamic Republic of Iran and attended by the representatives of the Kabul government and the high political delegation of Taliban, was opened on Wednesday morning with a speech by Iranian Foreign Minister Mohammad Javad Zarif.

Addressing the opening ceremony, Foreign Minister Zarif highlighted the US’ failure in Afghanistan and more than two decades of its presence in the country which has resulted in major damages, and said, “Today the people and political leaders of Afghanistan must make hard decisions for the future of their country.”

Pointing to the undesirable results of continued clashes in Afghanistan, Zarif said returning to the intra-Afghan negotiating table and commitment to political solutions are the best choice that can be made by Afghan leaders and political movements.

He also expressed Tehran’s preparedness to help the process of talks among the existing parties in order to settle the ongoing conflicts and crises in the country.

It should be noted that in this round of talks, the Afghan government’s delegation is headed by Yunus Qanuni, the former foreign minister of Afghanistan, and the Taliban delegation is led by Abbas Stanikzai, the deputy head of the group’s office.