India FM Stops over in Iran to Discuss Terror Attacks 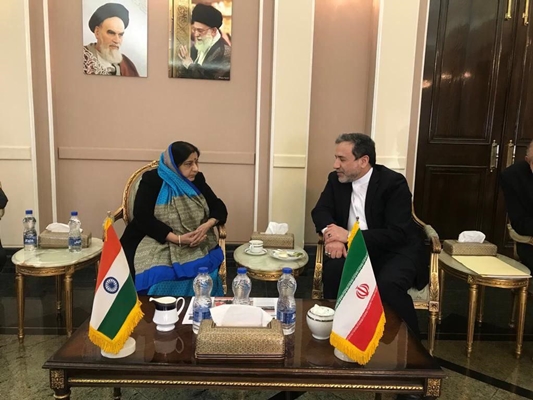 Indian Foreign Minister Sushma Swaraj had a short stopover in Tehran on Saturday to discuss the recent deadly attacks in Iran and India whose perpetrators were linked to Pakistan.

During the short visit, the Indian foreign minister sat for talks with Iranian Deputy Foreign Minister for Political Affairs Seyyed Abbas Araqchi, as the Iranian top diplomat Mohammad Javad Zarif was in Germany to attend the Munich Security Conference.

The two officials condemned the recent terrorist attacks in Iran’s Sistan and Baluchestan and India’s Srinagar, and offered sympathy to each other.

They also underlined the necessity of establishing peace and calm in the region through dialogue.

Iran & India suffered from two heinous terrorist attacks in the past few days resulted in big casualties. Today in my meeting with Sushma Swaraj the Indian FM, when she had a stopover in Tehran, we agreed on close cooperation to combat terrorism in the region. Enough is enough! pic.twitter.com/uvwlx45pZ6

Pakistan is facing accusations of harbouring terrorists from western neighbour Iran as well as eastern foe India after dozens of soldiers were killed in separate suicide attacks in the two countries.

Both India and Iran have warned of strong responses to the attacks, which they blame on militant networks based in Pakistan.

Forty-four members of India’s paramilitary police were killed in a suicide car bomb attack in the disputed region of Kashmir on Thursday.

The Pakistan-based militant group Jaish-e-Mohammad (JeM) claimed responsibility for the attack, which was carried out by a 22-year-old man who was born in Indian Kashmir.

India has long accused Pakistan of sponsoring terrorist attacks by Jaish-e-Mohammed and other militant groups, with Pakistan’s Inter-Services Intelligence (ISI) suspected with helping create the group.

On Saturday, Iran echoed India’s complaints, blaming Pakistan-based militants for the deaths of 27 IRGC border guards in a suicide bombing near the Iranian-Pakistani border earlier this week.

The perpetrators of the recent deadly terrorist attack in Iran had been trained in neighbouring Pakistan, said Major General Yahya Rahim Safavi on Saturday, adding that Pakistan’s Inter-Services Intelligence (ISI) should be held accountable for the deadly attack.

“These wicked criminals (the perpetrators of the terror attack) were [members of] one of the ethnic groups in Baluchestan province, who had received training in the neighbouring country to conduct suicide attacks,” said General Safavi, who is a senior advisor to Leader of the Islamic Revolution Ayatollah Seyyed Ali Khamenei.

“Our neighbouring country (Afghanistan) and the ISI should be answerable to the Iranian government and nation as well as the IRGC regarding how they (the terrorists) crossed the country’s border, and why this neighbouring country has turned into a safe haven and a place for training and dispatching these unfaithful terrorist groups,” said the top general.