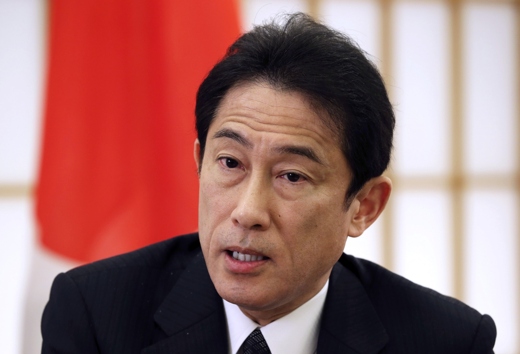 The international community, including Japan, has high expectations of Iran as a responsible, big country, the Japanese top diplomat said in an interview with Iran daily.

In the wake of the Iran nuclear deal, a number of senior officials from powerful countries have arrived in Tehran to talk business. Japanese Foreign Minister Fumio Kishida is the latest such official to visit Iran. The Japanese media have said that Foreign Minister Kishida follows two priorities in his visit: planning for Iran-Japan economic ties in the post-sanctions era and reviewing the latest developments of the nuclear deal between Iran and world powers.

The Japanese media have also reported that Japan and Iran are on course to inking a bilateral investment treaty under which the Japanese companies will develop Iran’s oil fields and other commercial activities.

Iran Newspaper on October 12 published an interview with the Japanese top diplomat on the objectives of his Tehran visit. Minister Kishida said in the interview conducted prior to his arrival in Tehran that Tokyo has adopted a new approach toward trade exchanges with Iran which is a regional heavyweight. He also said that Japan no longer views Iran simply as an oil supplier; rather, Tokyo is seeking to develop ties with Iran on other fronts such as science, art and culture.

Since November 2013, this is Minister Kishida’s second trip to Iran. He said he is happy to visit Iran and is eagerly waiting for a meeting with his Iranian counterpart Mohammad Javad Zarif. The Japanese foreign policy chief also pointed to a friendly match between Japan and Iran scheduled for Tuesday (October 13) in Tehran’s Azadi Stadium and said the two countries are great soccer rivals, hoping the two countries can compete on different fronts and boost their progress and development.

The following is the translation of part of what the Japanese top diplomat said on different topics in the interview:

The international community, including Japan, welcomes with open arms the Iran nuclear deal which came on the back of efforts to tap diplomacy. Conclusion of the final nuclear deal through dialogue is a good example of an Iranian proverbial expression which says ‘When you can untie a knot with your fingers, why use the teeth?’ Issues can be settled on the world stage through dialogue.

FM Zarif and his performance

I highly appreciate the efficiency of Dr. Zarif’s approach in nuclear talks and the endeavors of all members of the negotiating team who brought the nuclear issue which dragged on for more than ten years to an end. The Japanese are widely known for their perseverance and I [as a Japanese] praise the patience Mr. Zarif displayed during the long-running negotiations.

I think that conclusion of the deal and now its implementation are highly significant. The Iranian government proved steadfast in working out the nuclear deal, and I hope the Iran nuclear deal will be implemented consistently. Japan will cooperate [with Iran] in implementing the nuclear deal.

Iran is a big country home to around 80 million people. Iran, which is rich in gas, oil and natural resources, has huge potential. Iran is particularly attractive not only for Japan but also for many companies in the world. It has enormous capabilities as far as economic exchanges with other countries and foreign investment are concerned.

I welcome remarks by Dr. Rouhani on absorption of foreign investment. [Following the Iran nuclear deal, President Rouhani announced that Iran is at the ready to have economic exchanges with other nations and attract foreign investment.] Japan voiced its readiness to cooperate with Iran and help it grow economically.

What matters here is that the Joint Comprehensive Plan of Action (JCPOA) is implemented consistently and – as a result – Iran and the international community can proceed with their trust-building measures. In that case, the Japanese companies will develop their activities in Iran, and Tokyo will support what the Japanese companies do in Iran.

To advance Japan-Iran talks on consultation services and investment, I would welcome any deal which supports the presence of Japanese firms in Iran. Japanese corporate figures will come with me to Iran in the hope of improving mutual economic relations.

To date, ties between Japan and Iran have been focused on energy which continues to be a key part in the two countries’ economic relations.

Nonetheless, I do not see Iran simply as a crude oil supplier. As two Asian countries, Japan and Iran have rich cultures and a long history. They can hold cooperation in a wide range of issues among them: the environment, medicine, culture, education, tourism, transportation, art, sports, etc. During my trip, I intend to bring up such cooperation in talks with Mr. Zarif.