If P5+1 fails to honor its commitments, we won’t go down the current path: MP 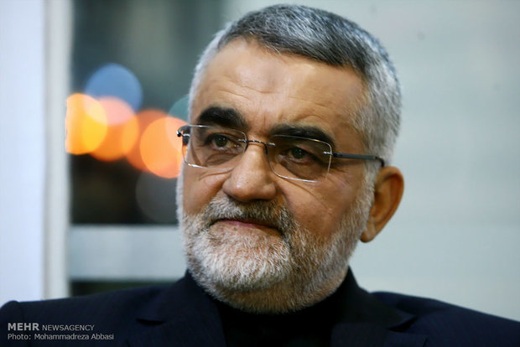 Alaeddin Boroujerdi said comments President Obama delivered after the Iran-P5+1 statement were mostly designed to justify Washington’s wrong policy of the past.

In light of the fact that the Americans develop nuclear weapons in violation of the (Nuclear) Non-Proliferation Treaty, they assume any country that ventures into the nuclear field seeks to make atomic weapons, Mehr News Agency quoted Chairman of parliament’s National Security and Foreign Policy Committee Alaeddin Boroujerdi as saying late Thursday after Iran and P5+1 issued a statement at the close of eight days of intensive talks in Lausanne, Switzerland.

The same mentality was to blame for the unjust sanctions they imposed on the Iranian nation, but those sanctions did nothing to deter Iran from continuing its nuclear activities in line with the NPT, the MP said.

“I believe the comments President Obama delivered after the Iran-P5+1 statement were mostly designed to justify Washington’s wrong policy of the past and aimed at Israel, Congress and America’s regional allies,” Boroujerdi said.

“President Obama openly said that he has no problem with Iran’s peaceful nuclear program; let’s not forget the fact that in the past they were even unwilling to acquiesce to Iran’s peaceable nuclear activity,” the MP said.

Boroujerdi went on to say that the reason why Obama stuck to a threatening tone was to justify their past imposition of sanctions against Iran. “‘If Iran’s nuclear program has been geared toward peaceful purposes, why on earth did we slap sanctions on the country in the first place?’ the American public opinion may wonder.”

He described Obama’s comments that Iran’s failure to remain committed to the terms of the understanding would lead to re-imposition of sanctions as more of political maneuvering, and said they have accepted that Iran’s nuclear program has been peaceful and the Fatwa the Supreme Leader has issued is the best foundation for such assumption.

He warned in case the other party fails to keep its end of the bargain Iran won’t go down the current path.

As for American terrorism allegations against Iran, he said our definition of terrorism is certainly different from theirs. We act in line with international rules and regulations to support groups like Hezbollah and Hamas.

He concluded that the US which has helped with the emergence of IS is a sponsor of terrorism not the Islamic Republic of Iran which helped the Iraqi Army rid Tikrit of terrorists.