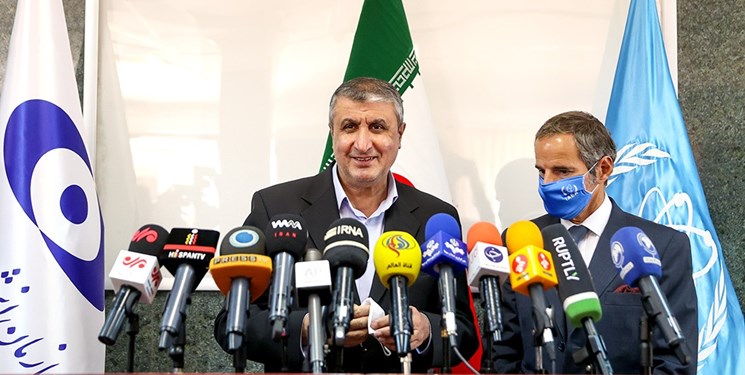 Iran and the International Atomic energy Agency agreed that the IAEA’s inspectors would be allowed to overhaul specified surveillance equipment and replace their memory cards, which will be kept under joint seal in Iran.

The agreement came after a meeting between the IAEA chief Rafael Grossi and the head of the Atomic Ednergy Organization of Iran, Mohammad Eslami in Tehran on Sunday.

In a joint statement, Grossi and Eslami reaffirmed the spirit of cooperation and mutual trust and the importance of its continuation, as well as the need to address differences in a constructive and exclusively technical manner.

Within the framework of existing interactions and cooperation, the two sides also decided to continue reciprocal meetings at relevant levels.

In this regard, the Vice President and the head of the Atomic Energy Organization of Iran will meet with the IAEA chief on the sidelines of the agency’s general meeting and the Director General will also travel to Tehran in the near future for high-level consultations aimed at strengthening cooperation between Iran and the IAEA in various fields.

Grossi described his meeting with Eslami as positive and stressed the need to expand cooperation between Iran and the IAEA. He also confirmed that he would return to Tehran for high-level talks with Iranian officials in the near future.

He had earlier told member states of the Agency’s board of governors there had been no progress in talks with Tehran on two central issues: “Explaining uranium traces found at several old, undeclared sites and getting urgent access to some monitoring equipment so the agency can continue to keep track of parts of Iran’s nuclear program as provided for by the 2015 deal”.

The IAEA chief arrived in Iran early on Sunday.