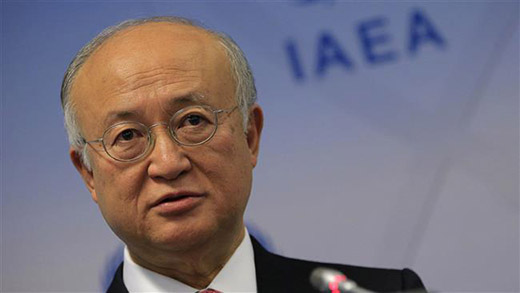 Significant progress has been achieved, Yukiya Amano told reporters in Vienna a day after his Iran visit.

The director general of the International Atomic Energy Agency (IAEA) has hailed the “significant progress” made in the implementation of a roadmap signed between Iran and the UN nuclear watchdog in July.

“Significant progress has been achieved,” Yukiya Amano told reporters in the Austrian capital Vienna on Monday, a day after visiting Iran.

The IAEA chief, however, stressed that “much work remains” to be done so that the agency could complete its investigation of Iran’s nuclear program before the December 15 deadline set in the roadmap.

The Atomic Energy Organization of Iran (AEOI) announced that Iranian experts took samples from Parchin site in accordance with relevant directives and procedures, and submitted them to the UN nuclear agency.

“Iranian experts took environmental samples from specific locations at Parchin complex without the presence of the Agency’s inspectors,” said the spokesman of the AEOI Behrouz Kamalvandi.

He said the sample-taking followed recent talks between Iran and the IAEA on mutual cooperation within the framework of the roadmap.

“The agency can confirm the integrity of the sampling process and the authenticity of the samples, which were taken at places of interest to the agency at the particular location in Parchin,” he stated, adding, “Authentication by the agency of the samples was achieved through use of an established verification process. The process was carried out under our responsibility and monitoring.”