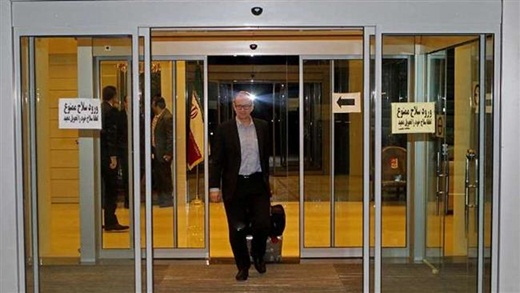 The IAEA team is scheduled to hold day-long technical negotiations with Iranian officials within the framework of the implementation of the Framework for Cooperation.

A delegation of experts from the International Atomic Energy Agency (IAEA) has arrived in the Iranian capital, Tehran, to hold technical talks with Iranian officials.

The five-strong delegation, led by Tero Varjoranta, the IAEA deputy director general and head of the department of safeguards, arrived in Tehran on Wednesday morning.

The IAEA team is scheduled to hold one-day technical negotiations with the relevant Iranian officials within the framework of the implementation of the Framework for Cooperation.

The Joint Statement on a Framework for Cooperation was signed in November 2013 to outline a roadmap on mutual cooperation on certain outstanding nuclear issues between Iran and the IAEA.

Behrouz Kamalvandi, the spokesman for the Atomic Energy Organization of Iran (AEOI), said on Tuesday that the negotiations between Iranian officials and the IAEA team will end on Wednesday night, adding that the day-long talks between Iran and the UN nuclear agency will focus on the two issues of alleged explosives testing at a site in the western city of Marivan and neutron calculations.

Behrouz Kamalvandi, the spokesman for the Atomic Energy Organization of Iran (AEOI)

He also noted that Tehran has already responded to all of the IAEA’s questions about Iran’s nuclear program.

The IAEA claims that Iran has not yet addressed specific issues such as questions on alleged research activities into explosives testing and neutron calculations.

Iran has rejected the accusations as baseless and repeatedly emphasized its readiness for full cooperation with the IAEA as part of its transparency efforts to help settle the country’s nuclear issue.

The IAEA has never concluded in its reports on Iran that there has been diversion in the Islamic Republic’s nuclear energy program toward military purposes.

On March 2, IAEA Director General Yukiya Amano once again verified the lack of any diversion toward non-peaceful purposes in Iran’s declared nuclear material. All Iran’s nuclear activities are strictly monitored by the UN nuclear watchdog.