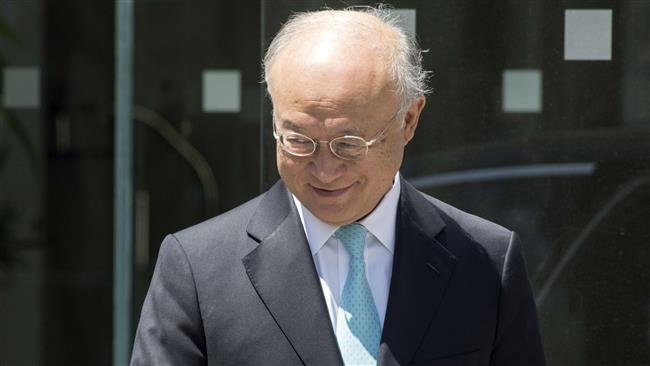 Amano visited some of the workshop locations at Parchin that have been the subject of unfounded allegations, Kamalvandi said.

Director General of the International Atomic Energy Agency (IAEA) Yukiya Amano has visited Parchin military site as a formality arranged during his brief stay in Tehran.

The spokesman of the Atomic Energy Organization of Iran (AEOI) said that Amano paid a visit to the military site on Sunday.

“In this tour, Yukiya Amano visited some of the workshop locations at the compound that have been the subject of unfounded allegations, especially the process of the repair and reconstruction of the access road to the Mamlou Dam near Parchin, which has gone down in a landslide due to recent rainfall,” Behrouz Kamalvandi said.

Iran has repeatedly denied Western allegations about secret nuclear activity at the site.

In remarks marking a deviation from past claims in the US about Parchin, the US Department of State on August 27 acknowledged that the site is a “conventional” military facility.

Kamalvandi added that, apart from meeting with President Rouhani, Amano has also met with his host, AEOI chief Ali Akbar Salehi. The UN nuclear chief traveled to Tehran at the head of a delegation on a one-day trip at the invitation of Salehi. Amano also met with Foreign Minister Mohammad Javad Zarif.

The AEOI spokesman said Amano also participated in a session of parliament’s JCPOA Review Committee at the request of Iranian lawmakers.

In a statement on Amano’s visit, the IAEA said the UN nuclear watchdog chief’s discussions with high-level Iranian officials focused on “continued implementation of the Road-map to resolve all past and present outstanding issues.”

“As part of the implementation of the Road-map, the Director General visited the site of Parchin, together with the Head of the Department of Safeguards, Tero Varjoranta,” the statement added.

In his meetings with high-level Iranian officials, Amano also discussed issues pertaining to the verification and monitoring of nuclear-related measures under the Joint Comprehensive Plan of Action (JCPOA), the statement read.