How Iran Standards Institute Gets Its First-Ever Female Chief 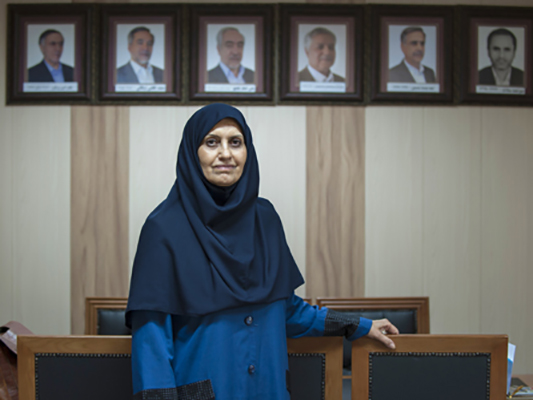 The female chief of the Institute of Standards & Industrial Research of Iran (ISIRI) has narrated the story of how she applied for a job at the Institute and finally became the first-ever woman to head the important body.

Nayyereh Pirouzbakht is the first Iranian woman to head of ISIRI. In a Farsi interview with the Shahrvand daily newspaper, she said she has achieved the post without nepotism.

“I applied for a job in the ISIRI after coming across an advertisement in a daily paper. I made progress in my job step by step. First, I was employed as an expert in one of ISIRI’s laboratories.”

“My last post before becoming the ISIRI chief was the general manager of the department responsible for evaluation of the quality of exported and imported goods,” Pirouzbakht went on to say.

“President Rouhani’s executive deputy introduced me to the cabinet as the head of ISIRIR and they endorsed me,” she said.

As regards the ISIRI’s status after the nuclear deal between Tehran and world powers and the removal of anti-Iran sanctions, Pirouzbakht said today ISIRI is deemed as an important and leading organization across the world so much so that no meeting on standards is held without Iran’s presence.

“Interestingly, after US President Donald Trump’s travel ban prevented Iranians from entering the US, the ISO convened its meeting in France instead of the US so that the Iranian representative could participate,” she noted.

Pirouzbakht said during its 57-year life, the ISIRI has set 32,000 standards of which 13,000 were set only over the past three years. “This means that the government of president Rouhani has set about one-third of all the national standards established over the past nearly 60 years,” she said.

According to Pirouzbakhat, after 15 years of active diplomacy, Iran has managed to achieve the coordinating role of the Committee for Near East, CODEX Alimentarius. “This comes 46 years after Iran joined ISO,” she noted.

When asked about the quality of some standard products, she said you can’t compare the Iranian-made goods with, for example, those of Japan but the Iranian producers are capable of making progress if people support them by purchasing their products.

She went on saying that setting standards for domestically produced vehicles has been one of the most challenging tasks of ISIRI over the past years, and added, “I personally don’t cast doubt on the quality of our vehicles but to promote their quality, we have already put together a plan in cooperation with Policy-Making Council of Auto-Making Industry. As per the plan, which has been implemented since March 20th, we will monitor the industry more seriously.”

She went on to say that the number of standards set for the vehicles in Iran will increase to 83 in the near future and added the production of the vehicles violating the standards would be stopped.

According to Pirouzbakht, the standards of the regional states in auto industry are not acceptable for Iran. “To cope with the problem, we have done our best to stop the trend. Today, if you check the website of Iran’s Industry Ministry, you will find out that the number of imported vehicles have decreased over the past year,” she said.

The sanctions inflicted a heavy blow on Iran because most of the vehicles which used to be imported from Europe began to be imported from third countries like the UAE and other Persian Gulf states whose standards in auto industry are not acceptable for Iran.

The head of ISIRI also referred to the rumours about the safety of the Iranian food products, particularly on the cyberspace, and said the ISIRI has been conducting various tests on the Iranian food markets and production processes.

“Today, the quality of our food industry is making considerable progress day by day and the producers observe the standards set by the ISIRI strictly. The progress is even more tangible in our export markets. Today, the export markets admit that the quality of our foods has improved significantly compared with previous years. Now we can compete with other international food industry in terms of quality.”

“Sometimes, our food standards are more accurate compared with foreign standards. Meanwhile, we are active in Halal industry and this promotes our status compared with others. I recommend our people not to take seriously the rumours on the cyberspace,” she added.

Pirouzbakht concluded that the ISIRI has set up a special unit to register the complaints filed against it and added, “We follow up the complaints immediately and fine any producer violating our standards.”