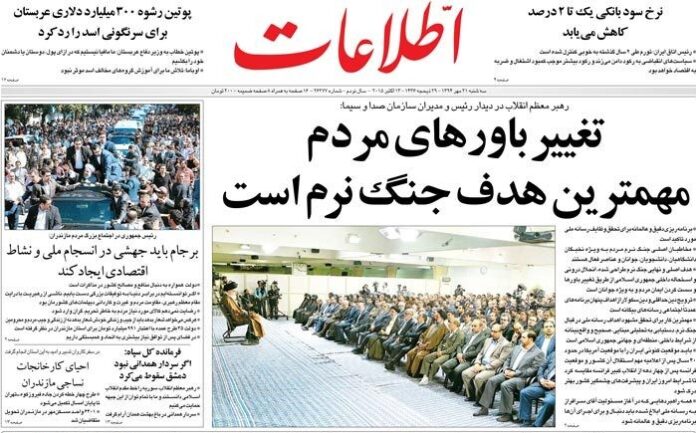 A special look at the headlines Ettela’at newspaper covered on October 13.

♦ “The soft war is primarily aimed at changing public beliefs,” said the Supreme Leader at a meeting with IRIB managers.

♦ Interest rates are to go down by between one and two percent.

The chairman of Iran Chamber of Commerce said that inflation has been tamed over the past two years.

♦ President Putin has turned down $300 billion in bribes to bring down President Assad.

It came as President Obama admitted American efforts to train anti-Assad groups have been ineffective.

♦ President Rouhani has said that the Joint Comprehensive Plan of Action should be a leap in national cohesion and economic dynamism.

He further said his government has always been after safeguarding national interests in talks [with other countries].

♦ “Had it not been for Brigadier General Hossein Hamedani, Damascus would have fallen,” said IRGC Commander Major General Mohammad Ali Jafari.

♦ Mazandaran Textile plants have been revived during a visit to the Caspian province by President Rouhani.