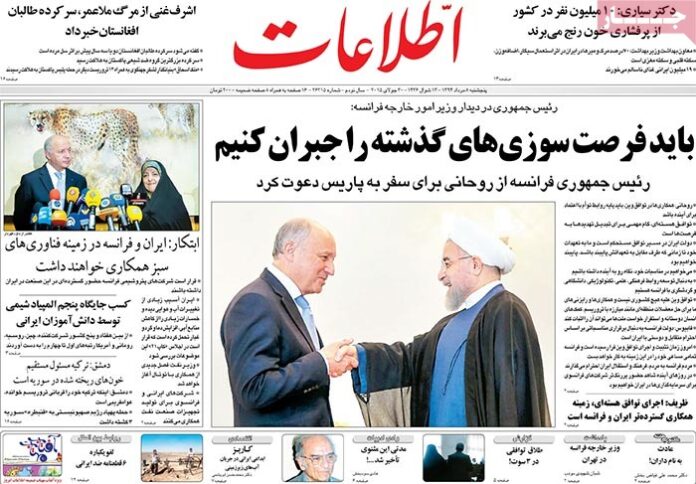 A special look at the headlines Ettela’at newspaper covered on July 30.

♦ “We need to make up for past failures to seize opportunities,” President Rouhani said at a meeting with visiting French Foreign Minister Laurent Fabius.

♦ “Implementation of the nuclear deal paves the way for wider cooperation between Iran and France,” Foreign Minister Zarif said [at a news conference after meeting his French counterpart in Tehran].

♦ “Some 10 million Iranians are suffering from hypertension,” the deputy health minister said.

Dr. Ali Akbar Sayyari further said that smoking, being overweight, heart attacks and strokes are to blame for more than 70 percent of all deaths in Iran.

He added that the nutrition of some 19 million Iranians is far from healthy.

♦ The Afghan president has said that Taliban ringleader Mullah Omar has died.

The Taliban kingpin is said to have died of TB more than two years ago.

In another development, the leader of the largest anti-Shiite gang in Pakistan was killed in a shootout with police.

♦ “Iran and France will cooperate in the field of green technology,” the director of the Environment Protection Organization said.

The French petrochemical companies are to have a stronger presence on the Iranian market.

♦ Iranian students have finished fifth in the International Chemistry Olympiad.

Students from 75 countries competed for glory in the event. China, Russia, the US and Romania claimed the four top spots in the final standings of the Olympiad.

♦ Damascus has said that Turkey is directly to blame for the blood spilled in Syria.

In other news, an Israeli drone strike in Syria left three people dead.