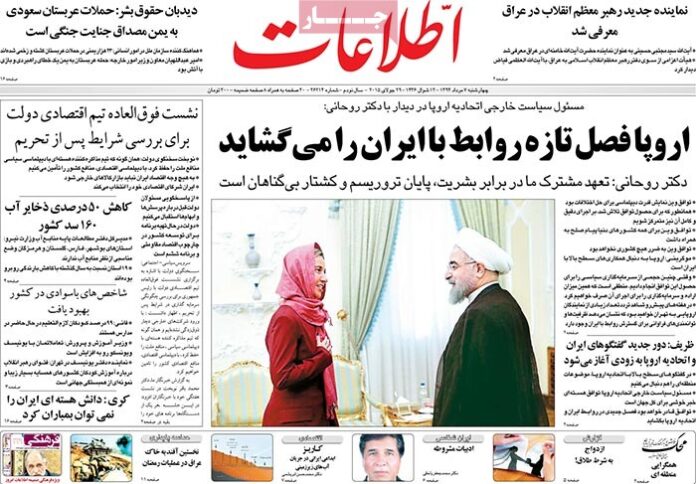 A special look at the headlines Ettela’at newspaper covered on July 29.

Ettela’at: “A new round of talks between Iran and the European Union will soon get underway,” Iranian Foreign Minister Mohammad Javad Zarif said after meeting with visiting EU top diplomat in Tehran.

Zarif told reporters that in high-level talks with Europe, regional questions are also brought up.

Ettela’at: Ayatollah Seyyed Mojtaba Hosseini has been named the new representative of the Supreme Leader in Iraq.

Meanwhile, Iranian Deputy Foreign Minister Amir-Abdollahian has described Saudi attacks on Yemen as “a strategic blunder and playing with fire”.

Ettela’at: President Rouhani’s economic team has convened an ad hoc session to review the country’s prospects in the post-sanctions era.

Ettela’at: The volume of water in the reservoirs of 160 dams across the country is down by as much as 50 percent.

Nineteen provinces have seen a decline in precipitation in comparison with last year.

Ettela’at: The literacy index in the country has improved.

The education minister has said that interactions with UNICEF and UNESCO are increasing.

Ettela’at: US Secretary of State John Kerry has said that the US cannot bomb away Iran’s nuclear knowledge.