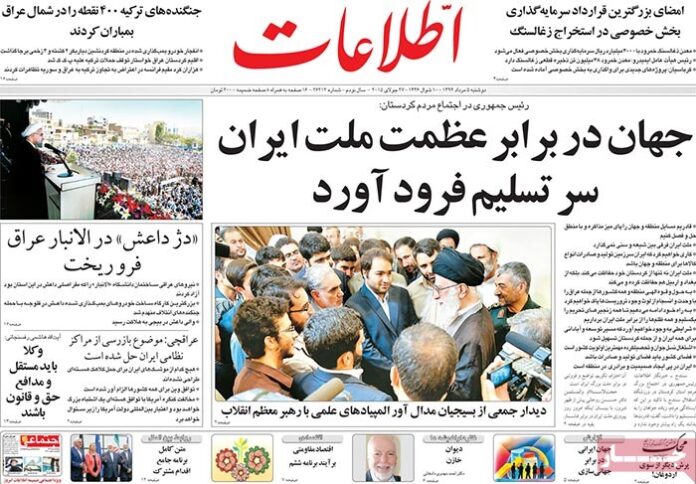 A special look at the headlines Ettela’at newspaper covered on July 27.

♦ “The world bowed its head in the face of Iranian glory,” President Rouhani told locals in Kurdistan Province.

♦ A number of Basijis who have won medals in world scientific Olympiads have met with the Supreme Leader.

♦ The largest contract on private investment in coal extraction has been signed.

Deputy Industries, Mines and Trade Minister Mehdi Karbasian has said that new projects are ready to be signed over to the private sector.

Iraq’s Kurdish Regional Government has called on Turkey to stop bombing PKK targets. In France, the Kurdish minority has staged a rally in protest against Turkish aggression against Iraq and Syria.

♦ The headquarters of IS terrorists in Al-Anbar has fallen to Iraqi forces.

The University of Anbar in southern Ramadi, which served as the headquarters of the terrorist grouping, has been liberated.

“None of the Iranian missiles are designed to carry a nuclear payload,” the Iranian diplomat further said.

“Failure of the US Congress to support the deal would be a big mistake which would cast doubt on the credibility of the American administration,” Araghchi added.

♦ “Defense attorneys should be independent as they uphold laws and stand up for the rights of their clients,” Ayatollah Hashemi Rafsanjani said.

♦ Zarif thanks sources of emulation