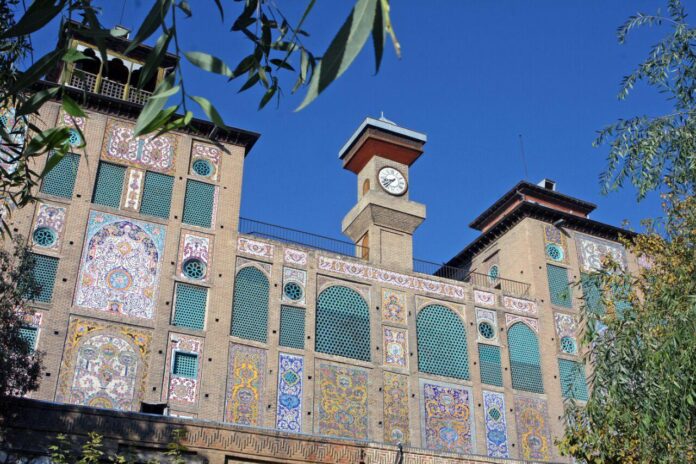 The clock of Shamsolemareh, the finest edifice on the eastern wing of Golestan Palace and the first high rise in Tehran, started to run after a 90-year slumber.

Shamsolemareh, literally meaning ‘edifice of sun’ is the tallest building in Golestan Palace and fuses Persian and European architecture into a five-story structure with two imposing  towers and a small clock tower in the middle.

For 90 years, people walking down Nasser Khosrow Street in downtown Tehran read 6:10 when they cared to look up at the clock, Mehr News Agency reported.

The famous clock was gifted by the British Queen Victoria (1819-1901) to Nasser al Din Shah (1831-1896) of the Qajar Dynasty more than a century ago. But it ticked a bit too noisily annoying the people who, at the time, used Golestan Palace as residence and court. Eventually complaints piled up and the authorities tried to reduce the unfriendly noise only causing damage to the clock.

Thus, the damaged clock was left unattended for almost nine decades until in 2010, master clocksmith Mohammad Saatchi Hamedani, 81, was asked to come over and take care of it. He complied. But barely 10 months later the clock again stopped working, because the sate-owned Iran Cultural Heritage, Handicrafts and Tourism Organization (ICHHTO) had no specific budget to be allocated to its maintenance.

However, according to the head of Golestan Palace Masoud Nosrati, the clock is now back to life. The ICHHTO has signed a contract for one year with Master Saatchi to keep an eye on the device.

“We’re going to renew the date of our agreement (with Saatchi) each year,” Nosrati said. “But the clock is now digitally driven, and there is no way of returning to the mechanical motor it once had.”

Clocks were among the special interests of Nasser al Din Shah. By collecting his clocks and watches, “we can showcase a valuable treasure for the public.”

The clock in Shamsolemareh is now working again, this time with no annoying noise.

Golestan Palace is the only remnant of Tehran’s historical citadel, a collection of erstwhile royal buildings that were once enclosed within large thatched walls. The citadel was built during the time of Shah Tahmasb I of the Safavid Dynasty (1501-1722). It was rebuilt in the time of Karim Khan (1705-1779) of the Zand Dynasty and was later turned into a residence and court for the Qajar rulers (1785-1925).