Foreign Ministry Spokesman Seyyed Abbas Mousavi has condemned the Financial Action Task Force’s blacklisting of the Islamic Republic saying that it is a politically-motivated action taken by international institutions.

In an interview on Friday, Mousavi said the stigma of money laundering and financing terrorism cannot be attached to Iran.

Mousavi added that the Islamic Republic of Iran has implemented all the laws and regulations related to fighting money laundering and financing of terrorism for more than two years.

“International mechanisms have advantages and disadvantages. Iran was blacklisted by the FATF despite all the efforts we made in the country and all the laws and regulations we tried to comply with.”

Unfortunately, this is also part of the politicisation of international mechanisms by the United States, Saudi Arabia and the Zionist regime. Due to their influence on these mechanisms, they are trying to influence these issues politically, underlined Mousavi.

He went on to say that Saudi Arabia as the central bank of terrorism and the Zionist regime as a government of terrorism are committing the worst crimes, and they are directing such measures against Iran using their influence.

The Financial Action Task Force (FATF) said on Friday that Iran would stay on its blacklist, and called on member states to sanction the country.

The Financial Action Task Force, a Paris-based monitoring group, had given Iran a February deadline to approve antiterrorism legislation or remain on the blacklist.

Although Iran’s parliament passed the legislation, a top body voted it down.

The blacklisting will complicate Iranian plans to sidestep American sanctions by instead doing business with European countries. France, Britain and Germany had said they would continue to do business with Iran as long as the country got itself off the FATF’s blacklist. 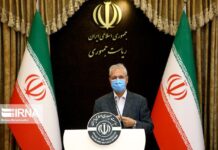