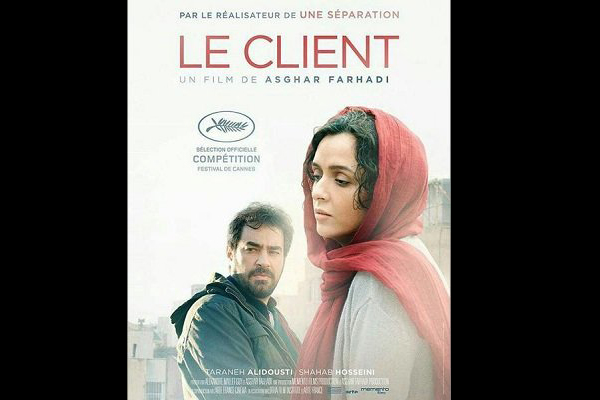 Iran’s famous director Asghar Farhadi's film The Salesman has been selected to compete for the Palme d'Or at the 2016 Cannes Film Festival.

Just days before opening the 69th edition of the Cannes Film Festival in the French city of Cannes, the latest feature film of Asghar Farhadi unveiled its poster with a French title different from the English title formerly announced. Farhadi is a renowned Iranian director, who won an Oscar for his 2011 film A Separation.

The movie tells the story of a couple whose relationship begins to turn sour during their performance of Arthur Miller’s Death of a Salesman.

“As in my previous films, The Salesman addresses how social challenges can propel the downfall of some people,” Farhadi was quoted as saying.

The 2016 Cannes Film Festival is scheduled to open on May 11, and Farhadi’s movie is announced to be screened on the day before the award ceremony on May 21 at Grand Théâtre Lumière.

Behnam Behzadi’s Inversion is another Iranian film participating in the event, which is scheduled to be competing in the Un Certain Regard section, run at the Salle Debussy, in parallel with the competition for the Palme d’Or.