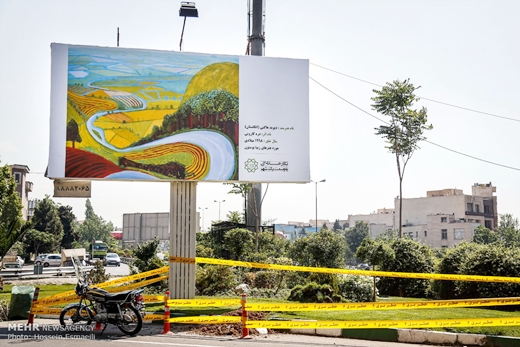 Copies of famous works of art, including many by prominent Western and Iranian artists, will appear next week on billboards and tableaus across the capital city of Tehran.

Over 2,000 billboard ads will be replaced with images by Pablo Picasso, René Magritte and Henri Matisse and reproductions of traditional Persian miniatures, carpets, calligraphy and many more for ten days, turning the face of the city into a huge art gallery.

The images selected for the project, “A Gallery as Large as a City”, are paintings generally kept in world museums, director of Tehran Municipality’s Beautification Organization Issa Alizadeh said in a press release published on Monday May 16.

“There has been a slight change in the second edition of the project, making the notes on each image easier to read. We have also tried to avoid the repetition of one work on several billboards in the city,” he explained.

Musavi also said that most of Tehran’s billboard spaces are run by private companies; however, they have agreed to dedicate their billboards to promoting culture across the city for a short period of time.

“Thankfully, people welcomed the idea last year, and we believe this project will help the citizens raise their knowledge of art and make them more familiar with artists and their works,” Musavi said.

“Our people are too busy to go to museums and galleries,” he said, adding, “So we decided to turn the entire city into a huge gallery.”

∗ Photo: A billboard displays “Garrowby Hill” by David Hockney during the project “A Gallery as Large as a City” in Tehran last year. (Mehr/Hossein Esmaeili)