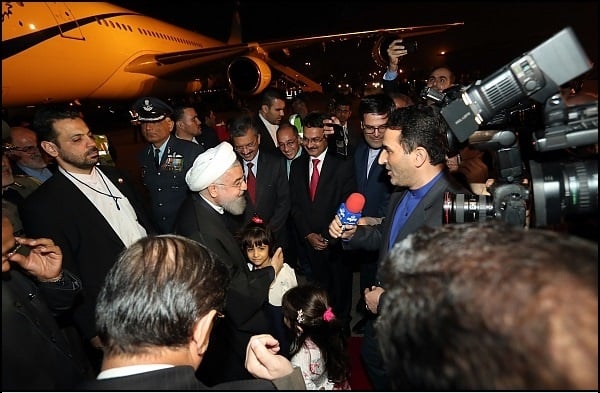 Iran’s President Hassan Rouhani says expansion of relations between Iran and India as the two major countries of Asia can be beneficial not only for the two nations, but also for the stability and security of the region.

Speaking to reporters upon his arrival at New Delhi airport, Rouhani said this official trip will in fact was made in two cultural, and political-economic parts with its cultural part made in Hyderabad.

“Meetings were held in Hyderabad with Muslim people, as well as with scholars and intellectuals from Iran,” IRIB News Agency quoted Rouhani as saying in a Farsi report.

“There exist many historical works in Hyderabad showing how the cultures of Iran and India are linked together.”

Rouhani also stated that In New Delhi, significant talks will be held with the president and prime minister of India regarding various fields of agriculture, modern technology, banking and transportation. He noted that this will be a major step in the development of relations between the two states.

“We will also hold talks with Indian officials on international and regional issues,” pointed out Rouhani.

In Hyderabad, he visited a number of tourist landmarks, including Hyderabad’s Qutub Shahi tombs, the Salar Jung Museum, Golconda Fort as well as Mecca Masjid. He also addressed a Muslim congregation at the Mecca Masjid, after performing his Friday prayers. During his speech, he said the only solution to the problems faced by the Muslim world is unity among Shias, Sunnis.

This was Rouhani’s second visit to Hyderabad and his first as Iran’s president.

In this historic city, Rouhani said Iran is willing to relax visa norms for Indians and share its “abundant oil and natural gas resources” with India for the progress and prosperity of Indians. He also expressed hope that India will reciprocate by simplifying visa rules for Iranians.

India and Iran have collaborated on key projects, most notably the Chabahar port in southeastern Iran that was inaugurated in December. India has been a key purchaser of Iranian oil and gas, and maintained trade ties even as international sanctions were imposed on Iran over its nuclear programme between 2012 and 2016.

New Delhi and Tehran will be hoping to iron out several issues particularly the slow progress on the Chabahar Port, which Iran feels has got stuck due to US pressure on countries and the latest set of sanctions on Iran; something that makes Rouhani’s bilateral talks with Indian officials very important.