Tehran Hosts Exhibition of Paintings on Integrity of Power, Militarism 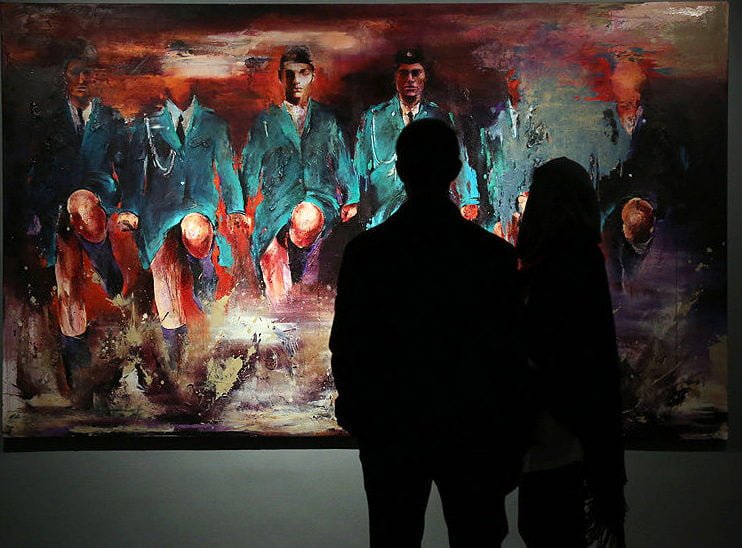 An exhibition of paintings by Amir-Hossein Zanjani, entitled "Marching", was recently held at Mohsen Gallery in Tehran.

“Similar to his previous collections, the new collection of works by Amir-Hossein Zanjani presented a painterly narrative of the image of power by reporting militarism in his new series of works, which is the simultaneous representation of power and desperation,” a statement released on the exhibition said.

“With expressionistic brushstrokes and colours, he depicted obvious and concealed figures in military clothes; however, some of these figures were dominant and triumphant while others seem to be defeated. In this collection, Zanjani made us encounter the contrast and division between figures in uniforms. He also made us question the integrity of power. He seemed to be referring to a relation hidden behind a veil of militarist authority that has compromised its unity and integrity, divided into two groups.”

Amir-Hossein Zanjani was born in 1980 in Isfahan. He is a painting graduate from the University of Tehran. In his paintings, he mainly deals with social issues with political and historical references, while human is always the main focus of his works.

Zanjani was rewarded by the Celeste prize, presented by an international community of art professionals. in 2011 and received a scholarship from the Siena Art Institute.

He was selected as the painter of the Year of Asia in 2013, and his works were featured at the Museum of Contemporary Arts in Singapore. His works are kept in several private collections in the Middle East, Europe and North America.

The “Marching” exhibition came to an end on December 14.