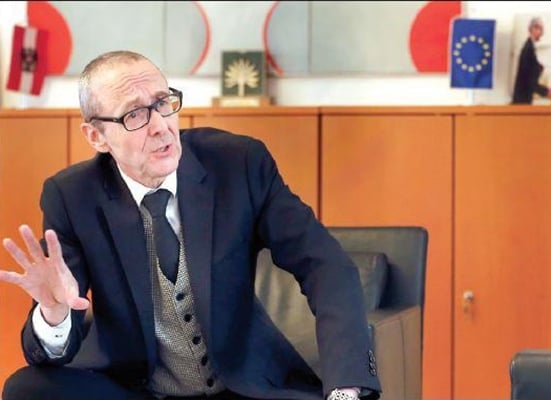 The Austrian ambassador to Tehran says the European companies’ withdrawal from Iran over the US sanctions was temporary, and they are returning to the country under new names

Not much is left until the second round of the United States’ unilateral sanctions against Iran goes into effect. By the admission of world countries and the United Nations, the bans are illegal this time. This is the first time that the world is standing by Iran against Washington’s sanctions. And the Europeans have been on board with Iran, too.

The beginning of round two of US sanctions against Iran and Europe’s countermeasures to harness the bans has coincided with Austria’s six-month chairmanship of the European Union.

The Hamshahri newspaper has recently conducted an interview with Austrian ambassador to Iran Stefan Scholz, seeking his views on the foreign policy of Austria and the European Union, the Iran nuclear deal (also known as the Joint Comprehensive Plan of Action or the JCPOA), and the impact of US sanctions on Tehran-Vienna relations.

Scholz calls Iran sanctions “deplorable” while believing that the current situation facing Iran is an opportunity for economic reforms as well as shaping cooperation with Europe on a larger scale than ever. The top diplomat says he is confident that Iran will weather the US sanctions. The highlights of the interview summarized by the IFP follow.

Q: After the JCPOA was signed, Austria was the first country to send its delegation to Iran. The team led by the Austrian president travelled to Iran at the highest level. The Iranian economic delegation led by President Hassan Rouhani also travelled to Vienna a few months ago. Figures show Iran-Austria trade hovers around $600 million. Why haven’t Iran-Austria trade ties grown as much as they should have since three years ago when the Iran nuclear deal was clinched? 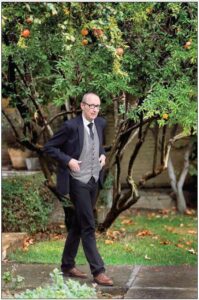 A: Look, the Austrians are not that active with regards to trading in goods. Our country’s capability mostly concerns infrastructure. Austria is present in major projects whose feasibility studies may take one to two years. Over this time, we have held talks with Iranian sides on the construction of nuclear hospitals and fifth-generation hospitals. We are planning several other major projects whose implementation will upgrade Iran’s technological level in the relevant field. Of course, these projects have been mothballed now until the fate of Iran-Europe cooperation becomes clear. The implementation of the projects hinges on the finalization of the financial mechanism between Iran and Europe.

Q: Why have the projects been halted? US financial sanctions have not come into effect, yet. Why are your companies concerned? Are they waiting for more support from the EU?

A: No. We are waiting to see through what channels financial payments between Iran and Europe will be handled. By the way, let’s not forget that Austria has the necessary technical knowhow in many joint ventures with Iran, but the implementation of the projects may need machinery or equipment procured from countries other than Austria.

The United States’ strategy toward Iran and the JCPOA was to create an atmosphere coupled with ambiguity, an atmosphere which affected big and small companies. Companies did not know to what extent they can get involved in cooperation with Iran. It was then when the concept of over compliance with the sanctions emerged. In other words, because the extent of the sanctions was not clear, companies preferred to stop their activities and, hence, became too much affected by the climate of sanctions.

Let me mention one point. The news which is published is not the whole story. I mean a company comes and says it has stopped its cooperation with Iran and it even releases a firm statement in that regard. However, the very same company resumes its cooperation with Iran under a new name and with a new address. Therefore, the current situation is not a black-and-white one; rather it should be regarded as a gray situation.

In fact, none of the European companies have left Iran completely and permanently.

Q: Europe has announced that it will work out a special financial mechanism vis-à-vis Iran. Not much detail has been released with regards to that mechanism. What are the details of this mechanism?

A: Since six months ago when the United States withdrew from the JCPOA, the European Union has been trying hard to create a toolbox to conduct financial transactions with Iran. Accordingly, the European companies which intend to work with Iran under EU rules can use the facilities in this toolbox. In a meeting of a committee looking into cooperation between the European Investment Bank (EIB) and Iran, Austria put forward a proposal for cooperation, which immediately received ‘yes’ votes, and received final approval by the European Parliament. One should admit that it was the first and most serious EU show to support Iran against US sanctions.

Europe’s next move was to update the so-called “blocking regulations” first approved in 1996, which needed to be updated.

Do not forget that we have many legal and statutory agreements with the US, and whatever ruling American courts issue against a company can be enforced by European countries based on our traditional mechanisms in Europe. However, the blocking regulations have come into force in order to help Iran and prevents the enforcement of the rulings [issued by US courts]. This is an important development.

Q: But some in Iran believe Europe has not backed us as it should have.

A: Look, all of these things are a new development for us in Europe. This is the first time that Europe wants to work with a country that has come under US sanctions. Everything the EU does is aimed at preserving the JCPOA. This is the first time that I, as the Austrian ambassador to Tehran, regularly receive reports from the Austrian Central Bank and Finance Ministry, and I give them reports, in turn. In fact, the nuclear deal with Iran has helped us in Europe to establish better coordination between different institutions both at the national level and at the level of the institutions affiliated with the EU to be able to create channels for financial transactions with Iran and keep those channels open. In fact, we are creating a new platform to maintain economic relations with Iran, a platform which is new from every aspect and will become more and more complete gradually.

On the whole, I should say that the special financial mechanism is meant to serve as a framework for conducting financial transactions under the supervision of the EU and to provide for trade between EU members and Iran, and between thirds countries and Iran in such a way that banks are not involved.

Q: Do you think this financial platform will have the required efficiency?

A: This platform is supposed to be dynamic; i.e. as new developments unfold, this financial tool will change, too. So, a system will be put in place which will change in accordance with how Washington will behave with regards to sanctions. One should bear in mind that if the sanctions are imposed, the EU will have to forgo $ 10 billion in exports. Therefore, keeping these financial channels is important to us.

As you said, the JCPOA and its subsequent issues helped the EU to act in a more coordinated manner. In fact, the European block basically tried to revive its status as an international player by entering into nuclear talks and channeling the negotiations.

Q: Last month, even John Bolton scoffed at the EU and said the union talks well, but does not do anything in practice. He said the United Sates will not allow Europe to circumvent its sanctions. In fact, the US openly seeks to eclipse Europe’s role in international politics as a global power. What’s your take on that?

A: This is the first time since World War II that Europe is seeking to put in place a mechanism to thwart US actions. This is a rare event. The Iran story has changed many things, things whose meaning we still don’t know and are new to all of us. It is a new playing field. We have completely realized how your government has taken in all these crises and challenges to create a new dialogue in its foreign policy arena and, at the same time, be able to overhaul the country’s economy. The whole story is an educational book, teaching us how a country can turn a major challenge into a major opportunity. With that in mind, the EU is taking action.

Q: Less than 20 are left before the second round of US sanctions against Iran goes into effect. Given Austria’s presidency over the EU, you are now regarded as the EU representative to Iran as well. With US sanctions looming, if you want to talk to Iranian people, what would you tell them?

A: I recommend Iranians adopt the strategy of maximum patience and forbearance in the face of Washington’s strategy of maximum pressure. This has made Iran the ethical player in international politics. Your country is very powerful when it comes to economic resilience. I am confident that Iran will weather US sanctions.