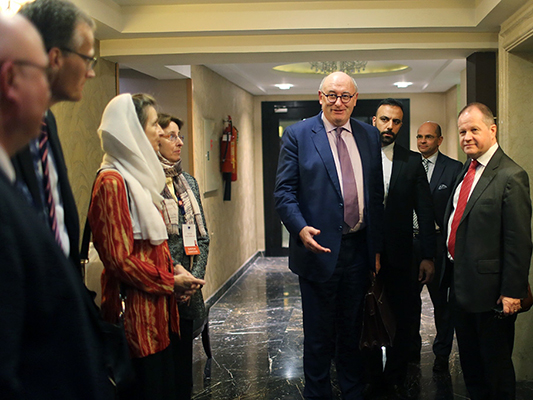 An Iranian lawmaker says the visit of a 70-member European delegation to Iran is just a show and they are seeking their political goals rather than economic ones.

Iranian MP Ezatollah Yousefian Molla said the visit of the European economic delegation to Iran is aimed at launching an office in Iran, so it seems that their objective is not to provide economic or investment services.

The Islamic Republic ultimately will not agree to the establishment of an EU office in the country, he told ICANA in a Farsi interview.

“In the past, we have had the experience of economic cooperation and providing services. Japan offered good services to Iran before and after the Revolution in the field of harvesting rice, and other countries also had plans in the field of seed improvement, land productivity improvement, and environmental protection,” said this member of Iranian Parliament’s Planning and Budget Commission.

He argued that the provision of economic services by Europeans has many attractions for them.

“However, they are linking these services to establishing an office in Iran so that they can interfere in our political and human rights affairs, which we have always been opposed to.”

The legislator added that “if Europeans provide services in fields like agriculture, including flowering, planting and growing rice, then we welcome them. Of course, they can invest in these areas after providing services.”

Pointing out that some European countries, including France, have anti-Iran stances, he said, “The Europeans took a major step to establish ties with Iran after the nuclear deal, but the result of economic delegations’ visits was inking a few contracts, such as Total. However, that deal had nothing to do with their visit and Iran’s oil minister himself attracted these investments.”

The lawmaker also criticised Europeans for not investing in infrastructures, saying, “They are expected to invest in areas such as rail and road development, but instead they invest in car industry which is an early-return investment.”

“Therefore, we cannot pin our hopes on Europeans as they obey the United States and would never sour relations with Washington for the sake of Iran.”