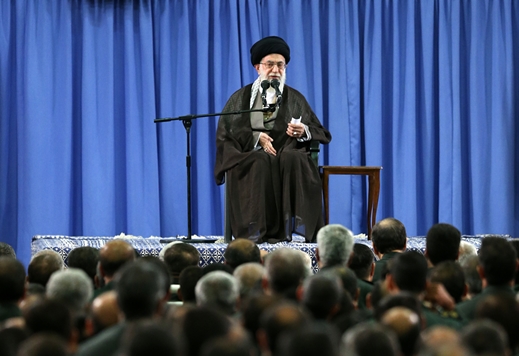 Economic and security infiltration is not as important as intellectual, cultural and political infiltration, Ayatollah Khamenei said.

Leader of the Islamic Revolution Ayatollah Seyyed Ali Khamenei says the enemy’s infiltration is a major threat to Iran.

The Leader made the comment in a meeting with commanders and officials of the Islamic Revolution Guards Corps (IRGC) in Tehran on Wednesday.

“Economic and security infiltration is not as important as intellectual, cultural and political infiltration,” Ayatollah Khamenei said.

Of course, Ayatollah Khamenei said, different institutions, namely the IRGC, will firmly stand up to security infiltration, urging authorities to remain on the watch for economic infiltration as well.

For cultural infiltration, said the Leader, the enemy seeks to distort and undermine beliefs which underpin society.

“When a country is affected by such political infiltration, the direction in which that country moves will be according to the will of hegemonic powers,” the Leader noted.

Ayatollah Khamenei urged the nation and authorities to remain vigilant in the face of enemy schemes.

“If we are watchful, the enemy will be disappointed.”

He called for efforts to further reinforce the foundation of the Islamic Revolution and of a revolutionary way of thinking, saying, “This is the fundamental responsibility of the IRGC’s elite and all revolutionary elite in the country.”