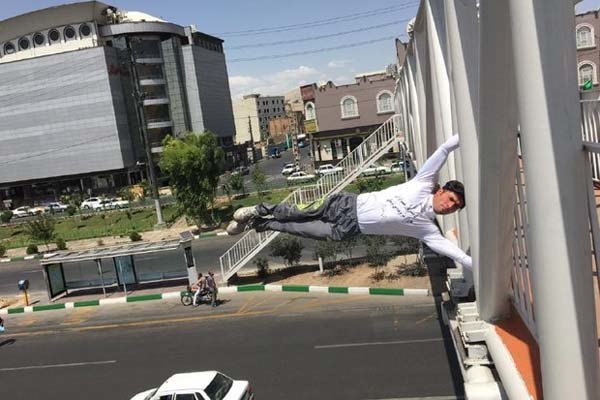 An Iranian disabled gymnast performed gymnastics flips as a tribute to defenders of the Holy Shrine [those who are fighting terrorism in Iraq and Syria].

According to a report By Mehr, as translated by IFP, a 29-year-old disabled gymnast, Behnam Roustaei, climbed up a bridge in Tehran to perform one of the most difficult gymnastics flips for the love of defenders of the Holy Shrine. 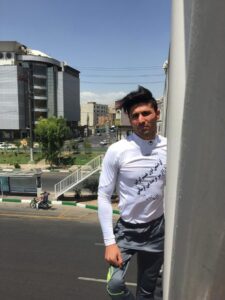 He is a young disabled man who walks with the aid of sticks, but you will not believe your eyes if you see his acrobatic moves. He was born and raised in Malayer, Hamadan Province, and always had a passion for tumbling and gymnastics.

“I had a penchant for gymnastics since I was a kid. I went through a lot of practices to learn how to perform gymnastics flips. Then, I strived to be a coach, however it was a long shot. I became an assistant coach in 2006 and managed to obtain my coaching license in 2010,” Behnam said.

“I personally revere the defenders of the Holy Shrine, but since I am not physically able to help them, I thought I would better show my affinity by performing the human flag move,” he added. 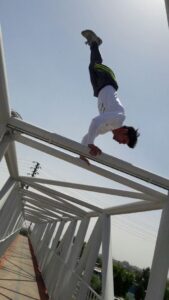 Behnam had set a record of this move a few years ago. However, he says he was not able to set it on the Guinness due to anti-Iran sanctions.

Human flag is an insanely hard gymnastics flip where the athlete holds a horizontal side plank position while only holding on to a vertical post or object.

“I performed the move to send a message to defenders of the Holy Shrine, saying that although we can’t fight abreast against the Takfiris, but we won’t let a day pass without thinking about you,” Behnam noted.

He was wearing a T-shirt with a poem printed on his shirtfront, which is construed as, “You despicable Takfiris [extremists], I’m from Iran! How dare you threaten me with severed heads?” 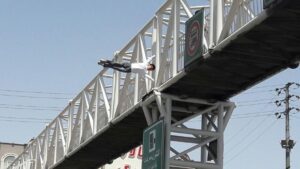