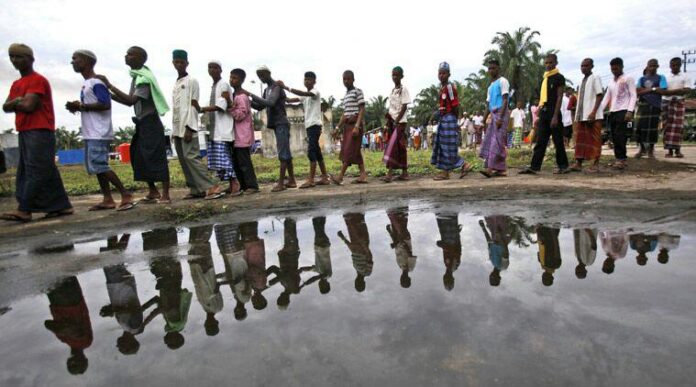 A political analyst says the persecution of Muslims in Myanmar is part of a scheme orchestrated by the US to gradually break the chain of Islam in Asia.

Mohammad-Ali Kashefi, an expert on international issues, has, in an interview with the Persian-language Basij Press website, expounded on Washington’s role in the catastrophe unfolding against Muslims in Myanmar.

He said it would be wrong to link the Myanmar disaster to the country’s historical events.

“We should accept that extremist Buddhists did not want to kill Muslims from the outset. If we look at the Americans’ performance after World War II, we’ll see that they had an extensive program for Southeast Asia, from the Vietnam War till now.”

“The Americans had predicted that if the growth of communism in the Asia-Pacific were not contained, two-thirds of the world population would become communists, which would jeopardize the US as a superpower.”

“Now, with this in mind, consider the danger posed by Islam to the liberalist ideology. You’ll see the only paradigm that can bring Washington to its knees is Islam, and that’s why they are seeking to reinforce the status of Buddhism, Hinduism and non-divine religions in Asia,” he noted.

“The United States’ biggest objective is to maintain its position and foothold in the region and across the world, so it seeks to break the chain of Islam which runs all the way from the Middle East to the Indian subcontinent. If North Korea was a Muslim country, it would have definitely been targeted by military action several times so far. However, Washington’s priority at this point in time is to cut off relations between Muslim countries in West and East Asia.”

“Malaysia and Indonesia are considered major Muslim countries in East Asia. There is also a considerable number of Muslims in China. India, Pakistan and Iran have completed this chain. The US has planned to break this chain at the hands of extremist Takfiris in West Asia, and Buddhists and Hindus in the East.”

He said Malaysia and Indonesia are distancing themselves from true Islam and moving toward liberal democracy, which could risk creating rifts in the Muslim world.

The political analyst noted that a gloomy future is awaiting Muslims in Myanmar.

“If the international community takes no action to stop the killing of Muslims in Myanmar, the Muslims are in for a bitter destiny.”

He said the US has planned to form small, isolated communities of Muslims in 50 years’ time, and is seeking this objective by strengthening non-divine religions in Asia.