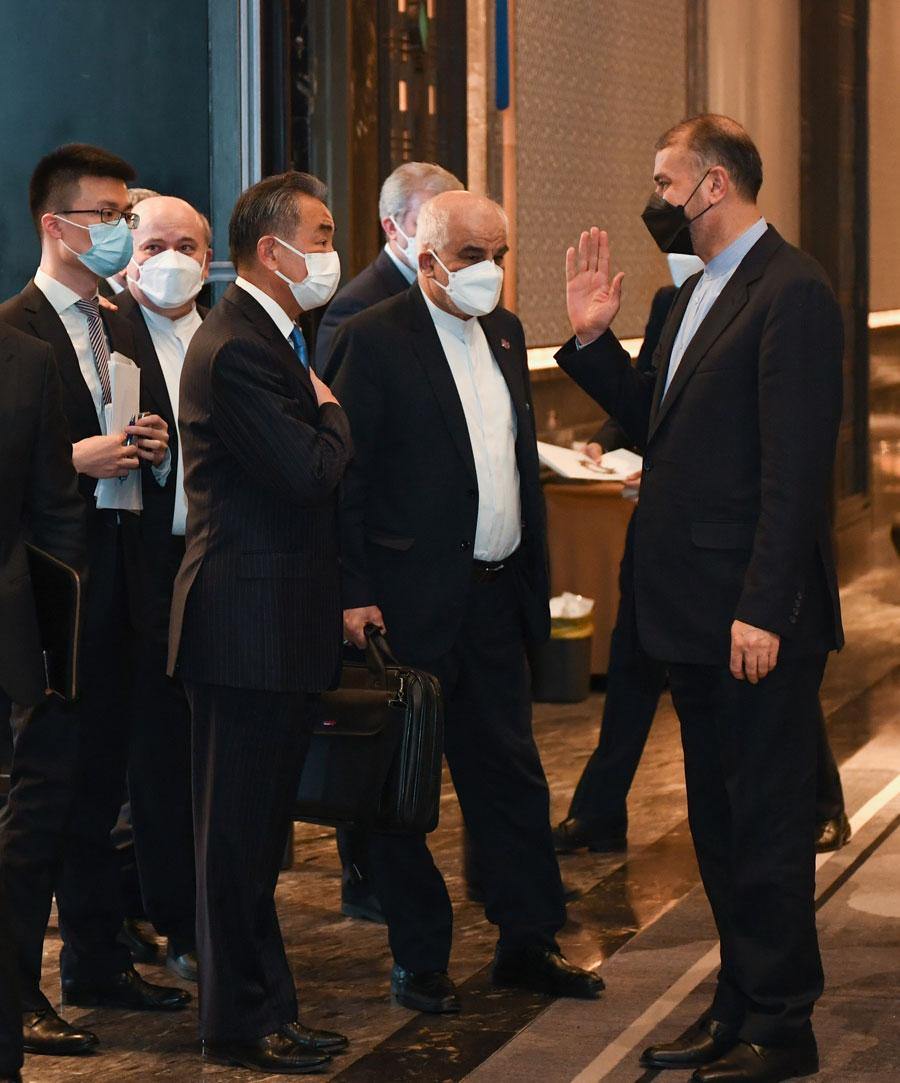 Beijing firmly opposes illegal unilateral sanctions against Tehran, political manipulation on human rights and other issues, and gross interference in the internal affairs of Iran and other regional countries, a Chinese foreign ministry spokesperson says.

“The two sides jointly announced the launch of the implementation of the comprehensive cooperation plan and agreed to step up cooperation in energy, infrastructure, production capacity, science and technology, medical and health care, expand cooperation in agriculture, fisheries, cyber security and third-party markets, and deepen people-to-people and cultural exchanges including education, film and personnel training to deliver more tangible outcomes of cooperation,” Spokesperson Zhao Lijian stated at a regular news briefing on Monday.

“Wang said that over the past year, China and Iran, under the guidance of the two heads of state, took the 50th anniversary of the establishment of diplomatic ties as an opportunity to strengthen solidarity and cooperation and deepen political mutual trust, making new achievements in bilateral relations. China stand ready to work with Iran to constantly enrich the two sides’ comprehensive strategic partnership, and open a new 50-year period for the development of bilateral relations,” Zhao continued.

“China will continue to make utmost efforts to provide vaccines for Iran to help the country defeat COVID-19,” he stated.

“China firmly opposes illegal unilateral sanctions against Iran, political manipulation on human rights and other issues, and gross interference in the internal affairs of Iran and other regional countries. China will firmly support the process of negotiations on resuming compliance with the JCPOA, and continue to constructively participate in the follow-up negotiations. China hopes that all parties will overcome difficulties, work in the same direction, and adhere to moving forward the political and diplomatic settlement process,” he added.

The Iranian FM “spoke highly of the celebration of the 50th anniversary of the establishment of diplomatic ties and the signing of the comprehensive cooperation plan between the two countries last year, and thanked China for providing strong support for Iran in its fight against COVID-19”, he noted.

“He said that Iran is firmly committed to the one-China principle, highly appreciates and will actively participate in the Belt and Road cooperation, firmly commits itself to promoting Iran-China cooperation, supports China in hosting a successful Beijing Olympic Winter Games, and will work with China to jointly oppose bullying acts and unilateral sanctions,” the Chinese diplomat added.

Iran and China signed the landmark agreement in March last year in defiance of the US’s unilateral sanctions, in a move aimed at bolstering their long-standing economic and political alliance. Amir Abdollahian and Wang signed final documents to announce the start of the Comprehensive Strategic Partnership between the two countries on Friday.

Wang has said the US bears primary responsibility for the ongoing difficulties with Iran, having unilaterally withdrawn from a 2015 nuclear deal. He added China firmly opposes unilateral sanctions against Iran, political manipulation through topics including human rights, and interference in the internal affairs of Iran and other regional countries.

In an article published by China’s Global Times newspaper on Thursday, Amir Abdollahian said Iran and China have criticized the sanctions system as The Long Arm Jurisdiction and stood against the double standards of human rights and the politicization of sports issues while emphasizing the development of commonalities and common human values.