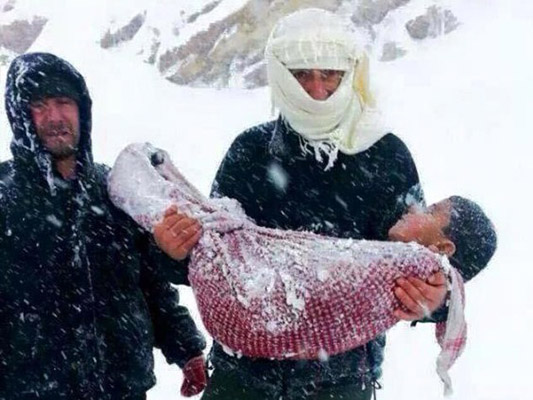 Hundreds of child refugees in various European countries, particularly Serbia, risk freezing to death as temperatures plunge to as low as minus -16C.

Many of the refugees, some of whom are as young as eight or nine, have no gloves or proper shoes, according to Save the Children charity.

It said several refugees have already come down with frostbite.

An estimated 2,000 refugees in Belgrade, Serbia, are struggling to survive in the bitter cold in makeshift shelters with no running water or sanitation.

“The EU’s continued failure on the refugee crisis is leaving thousands of people, including lone children, literally out in the cold,” Kirsty McNeill, Save the Children’s campaigns director, said.

“The lack of political will to offer asylum or reunify separated children and families, means these human beings, who have survived years of war, violence and deadly journeys to safety – are now freezing to death on Europe’s doorstep.

“These men, women and children need immediate access to warm, dry shelter, no matter what country they’ve fled…it is clear the EU’s policy has failed and there is a total inability to plan ahead.”

Serbia lies on the so-called Balkans Route, which has been used by hundreds of thousands of migrants and refugees to enter Europe.

According to Save the Children, up to a hundred migrants and refugees enter Serbia every day, with many heading to Belgrade, where the charity has set up an aid hub.

Though Serbia has not yet joined the EU, it borders with several EU members which have closed their borders to refugees, such as Hungary and Bulgaria.

As a result, aid workers say the country is becoming a “dumping ground” for migrants who are unable to move on towards central Europe.

“We are deeply worried at the situation of refugees and migrants faced with harsh winter conditions across Europe,” the UN’s refugee agency said earlier this week, Daily Telegraph reported.

“We have stepped up our assistance in several countries, including Greece and Serbia. Saving lives must be a priority and we urge States authorities across Europe to do more to assist and protect refugees and migrants.”

Some refugees and migrants have reported being assaulted by police on the Balkans route, and others say they have been robbed of crucial warm clothing.