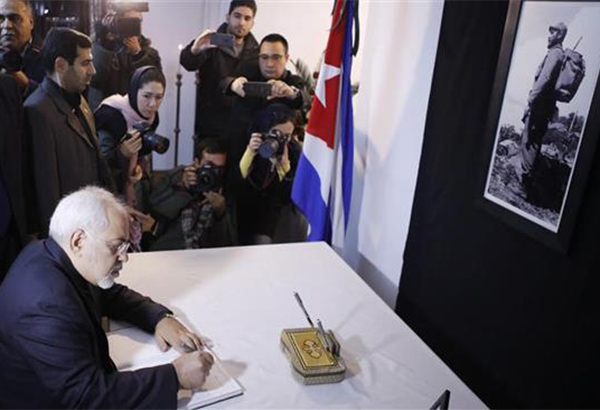 Addressing reporters, he called Castro’s demise a catastrophe for the world’s freedom-seeking movements, especially in the Latin American region.

He also recalled Castro’s remarks to President Hassan Rouhani during a recent visit by the Iranian chief executive to the Latin American country, in which he had communicated concern considering the situation in Cuba and the Third World, and urged unity among developing nations against arrogant powers.

Both Zarif and the Cuban envoy to Iran, Andres Gonzalez Quesada, meanwhile, hailed the status of bilateral Tehran-Havana ties and both sides’ resolve to strengthen their relations.

Cuba’s former president died last Saturday at the age of 90.

He famously led a guerrilla campaign that gained popular support and ousted US-backed Cuban dictator General Fulgencio Batista on January 1, 1959. He was then named prime minister.

On Saturday, President Rouhani also extended his condolences to Cubans over the death of Castro in a message to Cuba’s President Raul Castro.