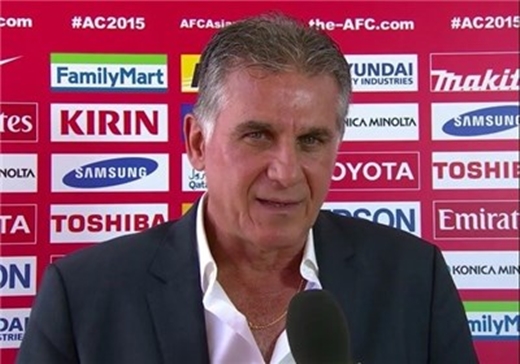 Carlos Queiroz has said that he is very proud of the way Iran’s football team played the game and the way they fought against Iraq in the quarterfinals of the 2015 AFC Asian Cup.

Iranian national football team coach Carlos Queiroz said he is proud of his players’ efforts against Iraq in the 2015 AFC Asian Cup on Friday.

Iran lost to Iraq 7-6 on penalty shootouts. The match went to penalties after the two Middle Eastern rivals finished all square at 3-3 at the end of extra-time.

“The Iranian players did everything possible to turn the game our way. I am very proud of the way they played the game and the way they fought,” said Queiroz.

“We go home now and it hurts a lot because the players worked hard and committed themselves, they deserve something more and they deserve respect from the fans. They have all my love and all my support because of the way they fought for the whole 120 minutes and penalties, and I feel very, very proud to be coach of this team and these players,” he added.

“Congratulations to the Iraq team for qualifying for the semi-final. The Iraqi players deserve all respect and consideration from Iranian fans,” added the former Real Madrid and Portugal coach.

“I wish Iraq the best of luck for the next game against Korea Republic, they played a good game and I hope they have success in their next match,” Queiroz told afcasiancup.com.