Can this government build a nation? 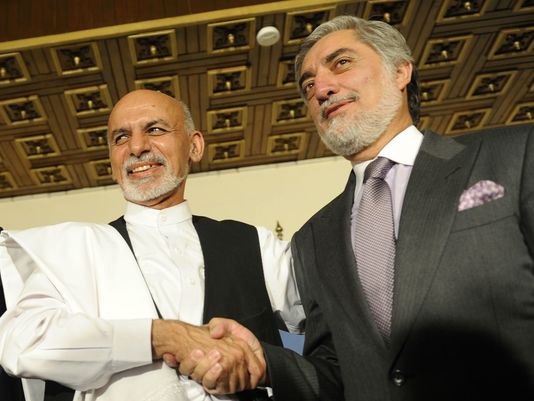 With the Afghan Cabinet lineup finally announced, two experts weigh in on the challenges the new government faces.

More than 100 days after Ashraf Ghani was sworn in as Afghan president, he finally named his cabinet. There are four women among his 25 nominees for ministerial positions. The president says they have been named based on their merit without any bias or ethnic consideration.

Among the proposed ministers are Lieutenant General Sher Mohammad Karimi,Salahuddin Rabbani and Nur ul-Haq Ulumi, who based on the decision of Afghanistan’s Government of National Unity are to take the helm of the ministries of defense, foreign affairs and the interior respectively. The following is the translation of a full-page report Mardom-e Emrooz daily published on January 13. It featured the viewpoints of two Afghan political experts.

Afghanistan’s Government of National Unity was forged on September 29. Deepening disagreement between Ashraf Ghani and his rival Abdullah Abdullah who both claimed to have secured the largest number of votes in the presidential elections, prompted Western governments, America in particular, to intervene and set the stage for the formation of a national unity government.

Under a power-sharing deal struck between the two rivals, Ashraf Ghani was named Afghan president while his rival Abdullah Abdullah was appointed as CEO of the fledgling government.

At his swearing-in ceremony, Ashraf Ghani vowed to name his cabinet within 45 days, a pledge which was delivered 110 days later, though.

The overdue decision of the government to name the cabinet drew a barrage of criticism. Some analysts blame the delay on disagreements between onetime-rivals-turned-partners Ashraf Ghani and Abdullah Abduallah.

Ashraf Ghani is now on a political honeymoon, but major challenges lie ahead.

There are four ethnic groups in Afghanistan: Pashtuns (make up 40 percent of the population), Tajiks (32 percent), Hazaras (16 percent), and other ethnic groups including Uzbeks (12 percent). Taliban insurgents, who affiliate themselves with Pashtuns, view Afghanistan as a land of Pashtuns and thus want Tajiks and Uzbeks to emigrate to Tajikistan and Uzbekistan. Time and again they have launched attacks against different ethnic groups, stoking a wave of insecurity throughout the country.

Ashraf Ghani must know that to launch an anti-corruption campaign, he needs to get prepared for confrontation with his enemies, those who raked in substantial fortunes in the previous government thanks to rampant corruption and rent and are now set to deal a blow to the government in case their interests are put at stake.

For years Taliban insurgents and their extremist affiliates have been trying to force the Afghans to commit to their radical interpretation of Islam. To counter such a move, the government should pave the way for fundamental social measures such as promotion of education, alleviation of poverty, creation of jobs and a crackdown on corruption.

The land of no consensus

By Fazel Rabi Wardak, an expert in Afghan affairs at The Asia Foundation

The Afghan government on Monday finally unveiled the full list of its Cabinet nominees. The announcement, after months of political uncertainty, is a promising piece of news. Over the past months, a lack of consensus among political leaders caused frustration among Afghan people. The history of Afghanistan remembers no political consensus among the country’s elite.

Time has come for Afghanistan, which has been in the grip of war for more than three decades, to honor the universally-accepted principles of democracy and take steps toward the rule of law. To do so, Afghanistan needs the contribution of all countries and it cannot wait for the establishment of peace to take action.

As a neighbor of Afghanistan, the Islamic Republic of Iran can be a leading player. Historically, Iran has always influenced Afghan issues. The fact that Iran has amicable ties with Abdullah Abdullah, the new government’s chief executive officer, makes it more likely that the two sides have had consultations on the cabinet lineup.

For years, Afghanistan has been ruled by governments in which ranking officials were appointed, but now the stage has been set for people in Afghanistan to get involved in politics.

Walking down the path of democracy, Afghanistan is facing multiple challenges. The formation of a new government will not solve all Afghan problems. The appointment of governors, managing local affairs and naming the heads of state institutions will be a time-consuming process.

Another challenge is the ethnic-sectarian mentality of the country’s leaders. It should be noted that the democratic principles should not be ignored only because such differences exist. The Afghan nation has no other choice but move in line with democratic principles under the banner of a law-abiding government. That’s why it cannot move backward.

Despite all barriers standing in the way, Afghanistan has taken a step forward by holding presidential elections, and more importantly revealing the cabinet composition. The solution to Afghanistan’s main challenge – tribal conflicts – lies not in giving each ethnic group their fair share of power, but in consensus among Afghan leaders.

The Afghan history shows that the Afghan people, made up of various tribes, have lived together peacefully and faced no problem whatsoever. Unfortunately those in power and tribal chiefs have fuelled sectarian differences and pitted ethnic groups against each other.

Afghanistan will relish in the prospect of a guaranteed future only when patriotic experts – irrespective of their tribal background – take charge. To pull through, the Afghans need to pin their hopes on the current government although it has staged a poor, inefficient performance over the past 100 days. The Afghans have to keep their hope alive, although there is just a glimmer.

This government is not a national unity government

The cabinet lineup was announced with delay because the government had to take into account some variables, including tribal issues and the share of different political groups. The tribal composition of the cabinet is one main reason behind the delay in revealing the Afghan cabinet.

Intragroup fighting was a factor too. It doesn’t mean that Ghani and Abdullah Abdullah were at odds; rather they each had disputes within their own political ranks. The pressures from other powerful political groups should be taken into consideration as well.

A legal advisor to the Afghan president has said that certain powerful people were jockeying to have their own choices included in the list of cabinet nominees.

In all fairness, the president was grappling with challenges before picking his cabinet choices. Prior to the announcement he had underlined meritocracy, but one should not forget that turning a promise into a reality is difficult. This, however, does not mean that seasoned ministers are absent on the published list.

I think Mr. Ghani has put forward his list based on some expediency to appease different political groups which were campaigning alongside him during the election. A number of those on the list have spent many years overseas with no experience in public office; that’s why there are doubts about their future performance in the government.

The standout feature of the government lineup is the presence of four women, as promised by the president. Mr. Ghani’s list also shows that he’s taken into account the political participation of all groups […].

The government is unlikely to face opposition in the Afghan parliament when it puts its proposed ministers to a vote of confidence because the absence of a cabinet three months after the formation of the unity government would create a political vacuum.

Furthermore, the Afghan MPs are preparing for a winter recess. So I think they will confirm the proposed ministers to break the current deadlock.

The unity government is more fragile than its predecessors. This government is beset by many problems among them war, insecurity and rampant corruption.

President Ghani has to overlook some issues to maintain his government on the one hand, and to meet the conditions set by the West on the other. As you know, the EU and the US have conditioned their financial assistance to Afghanistan on structural reforms and elimination of corruption.

War is yet another challenge the government is facing. The Afghan president cannot easily make insecurity a thing of the past in a country dogged by war for almost 36 years.