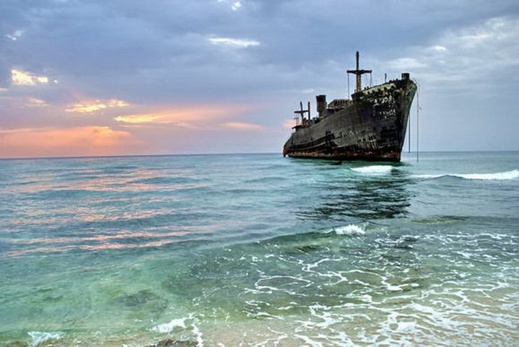 If the fate of the ship is to be tied to ill-considered plans, tourists will need to say goodbye to the vessel, because in the not-too-distant future, it will vanish from sight for good.

In Greece, the rise to power of a left-wing anti-austerity government has put the European country at risk of plunging into yet another crisis, posing a challenge to the European Union. In Iran, a country thousands of miles away, another Greek symbol is going down, seemingly sympathizing with the economy of her motherland. The following is a partial translation of a report Mehr News Agency published on February 28 on a ship perched off the coast of a southern Iranian island:

The [beached] Greek Ship, a landmark of Kish Island in the Persian Gulf, has started to sink deeper.

The CEO of the Kish Free Zone Organization says that keeping the ship where it sits right now is costly.

The ship which ran aground on July 25, 1966, off the coast of Kish Island with a large cargo of oil, is a main tourist attraction of Kish, which is known as the pearl of the Persian Gulf.

By local accounts, the Scottish ship which was steered by a drunken captain veered off course and instead of docking at a port in the vicinity of the island, ended up on its coast. Because the vessel was en route to Greece, it has since been known as the Greek Ship.

The ship is more prominent than all other tourist attractions of the island, including its luxury hotels, and whenever someone wants to present an image of the island, pictures of the ship come in handy.

The CEO of the Kish Free Zone Organization believes that with time, the ship will sink deeper, yet the plan presented by Sharif University of Technology to save the vessel from submerging, should be studied to see if it is cost effective.

His comments about the “costly” project come despite the fact that Kish earns extremely large amounts of money thanks to affluent tourists visiting it and sizeable investments in its construction sector.

Tourist says watching the sunset with the Greek Ship in the foreground is a major attraction of the island.

If the fate of the ship is to be tied to ill-considered plans, tourists will need to take their final pictures, because in the not-too-distant future, the vessel will vanish.