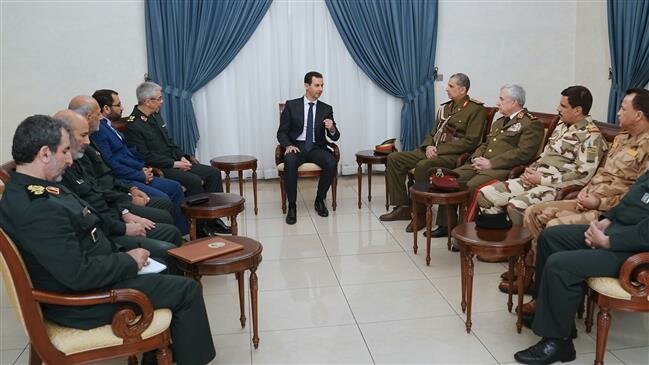 Syrian President Bashar al-Assad says cooperation among his country, Iran, and Iraq in anti-terror struggle has further strengthened their ties.

“The relation, which gathers Syria with Iran and Iraq, is strong,” Assad said in the capital Damascus on Monday, the official Syrian Arab News Agency (SANA) reported.

He made the remarks during a meeting with the visiting Chairman of the Chiefs of Staff of the Iranian Armed Forces, Major General Mohammad Bagheri and the latter’s Iraqi counterpart Lieutenant General Othman al-Ghanimi. Syrian Defense Minister General Ali Abdullah Ayyoub was also in attendance during the meeting.

The bond was reinforced during Syria’s battle against foreign-backed terrorism and militancy, Assad added, as the blood of Syrians, Iranians, and Iraqis “have mixed in the battle against terrorism and its mercenaries, who are considered as a mere façade for the countries that support them.”

Militants and terrorists bankrolled by the United States and some of its Western and regional allies launched a campaign of bloodshed and destruction against Syria in 2011.

Enlisting the help of its allies, Iran, Iraq, and Russia, however, the Arab country reversed the course of the battle, reclaiming one territory after another from the foreign-backed assailants.

The Islamic Republic’s assistance has featured military advisory support, while Iraq would battle terrorism on its common border with Syria and conduct sanctioned airstrikes against terror havens on the Syria soil.

Assad said the meeting was also one among the principles, with which “our people are distinguished and we are proud of, most importantly, the dignity and sense of honor.”

Baqeri, for his part, said that anti-terror fight and defending Syria, in turn, boosts Iraq and Iran’s security as terrorism threatens the three countries alike and also targets the region as a whole, SANA said.

The states and peoples of the region have to coordinate their efforts to combat this threat, he added.

During the presser, the Iranian military chief warned about efforts by stooges of the global arrogance to fuel insecurity in the Middle East. He stressed that the fight against terrorists will continue until their full elimination.

Leader of the Islamic Revolution Ayatollah Seyyed Ali Khamenei received a visiting Assad last month, noting that the Islamic Republic was honored to support Syria and considered it to be equal to supporting the entire resistance front. Ayatollah Khamenei emphasized that the triumph of the resistance front in Syria has made the United States angry and prompted it to hatch new plots.

The US has been leading a coalition consisting of scores of its allies in a 2014-present invasion of Syria. Damascus has invariably called for the coalition’s withdrawal, asserting that it rather serves to boost the terrorism that has been targeting the Arab nation.