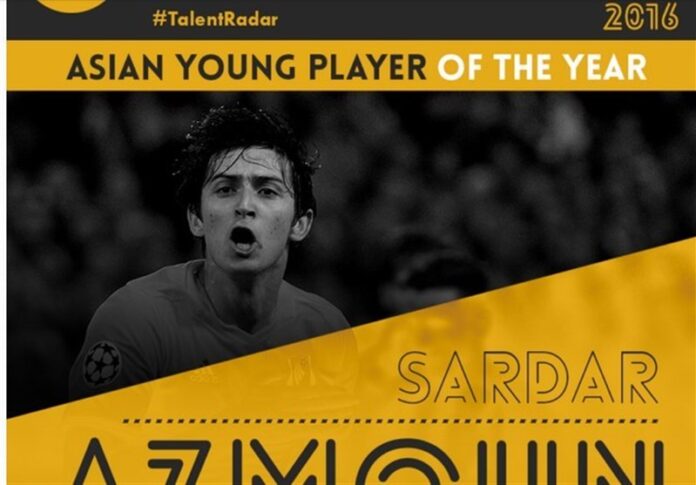 Iran’s striker Sardar Azmoun has been chosen as the Asian Young Player of the Year 2016 by outsideoftheboot.com.

The 2016 has been a thrilling year for Iran’s golden boy, Sardar Azmoun. Having made his loan spell permanent with Russian side FC Rostov following off the pitch complications, he embarked on a fairy-tale journey that transmitted to the rest of the side.

The side surprised the footballing world, with an incredible title challenge that saw them ultimately finish second, and book a place in Europe’s premier competition, for the first time in their history.

Azmoun’s best performances came towards the tail-end of the 2015-16 Russian Premier League season. The 21-year-old scored six goals in the last six games of the season, propelling his side to the top and holding off pressure for that coveted Champions League spot.

Rostov managed to secure three points against German champion Bayern Munich, helped by a goal from Azmoun en route a 3-2 victory. The youngster has also been ever present for his national side, striking four times across seven matches as the Persians look to book their place at the 2018 FIFA World Cup, in Azmoun’s adopted home – Russia.

The clinical striker has done well to adapt himself into Europe, having developed his football in his homeland with Sepahan. Relying on his finishing and dependable first touch, the Iranian international has leaped to fame and is enjoying the prime of his career, with 2016 possibly being just a sneak peek of what’s more to come.