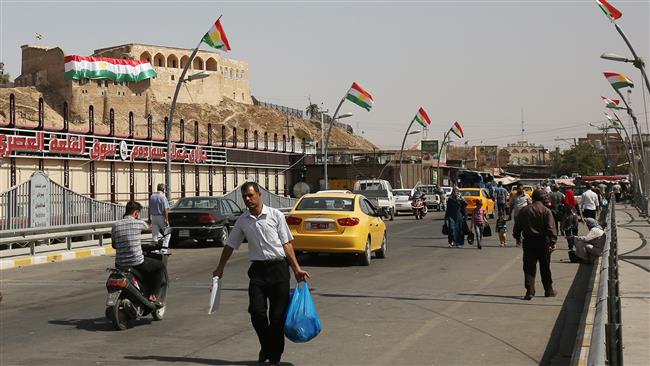 The London-based al-Quds al-Arabi newspaper on Monday quoted informed sources at the Office of the United Nations High Commissioner for Human Rights (OHCHR) as saying that 58 families had been “forcibly displaced” from Kirkuk so far.

The daily further said that the families were displaced to Diyala Province’s Miqdadiyah City.

The deported Arab families said Kurdish forces made copies of their documents and forced them to sign papers. They later found to have signed their purported endorsement of the referendum and participation in it.

The families said the Kurdish forces also marked their houses with a letter in red.

The Kurdistan Regional Government (KRG) held a non-binding referendum on secession from Iraq in defiance of Baghdad’s stiff opposition on September 25. Kurdish officials said over 90 percent of voters said ‘Yes’ to separation from Iraq.

The voting was held in the three provinces of Erbil, Sulaimaniyah and Dohuk that form the Iraqi Kurdistan Region as well as in the disputed bordering zones such as the oil-rich province of Kirkuk.

Meanwhile, the Iraqi government on Monday allowed foreigners stranded in the Iraqi Kurdistan after an international flight ban to leave the country via Baghdad despite not having a federal visa.

Foreigners who had entered the northern region on regional visas not recognized by Baghdad could previously not travel to other parts of Iraq.

“Any person can leave the country via Baghdad without paying a fine or for an exit visa,” Interior Minister Qassem al-Araji told reporters.

Baghdad imposed a ban on international flights into and out of the Iraqi Kurdish region on September 29 in response to the independence referendum.

Much of the international community, including the UN, the European Union and Iraq’s neighbors, has also opposed the referendum.

Israel has been the only entity to openly support an independent Kurdish state, with Prime Minister Benjamin Netanyahu backing “the legitimate efforts of the Kurdish people to attain a state” of their own.

Political observers have warned that KRG President Massoud Barzani’s referendum scenario is in line with Israel’s policy of dividing the regional Muslim states.