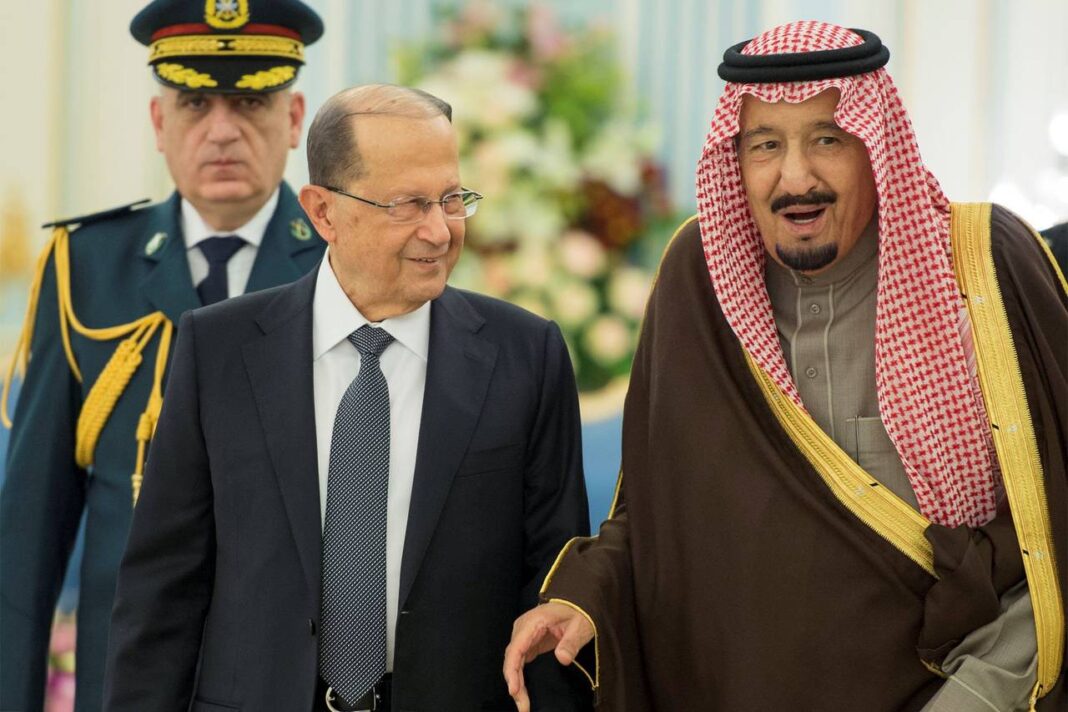 In an exclusive interview with Al Jazeera, Aoun said on Monday evening that his country is seeking to reconcile with Saudi Arabia, which severed diplomatic ties with Beirut last month.

The crisis erupted last month after video footage circulated online from an August interview in which Lebanese Information Minister George Kordahi made critical remarks about the Saudi-led coalition’s war against the Houthi rebels in Yemen.

Kordahi, a former game show host, stated the Iran-aligned Houthis are “defending themselves … against an external aggression”. Kordahi is a member of a small Christian party allied with Hezbollah, which backs the Houthis in Yemen.

Saudi Arabia has distanced itself from Lebanon in recent years, often criticising it for Hezbollah’s growing influence in politics. Riyadh considers Hezbollah a “terrorist” organisation.

Hezbollah has praised Kordahi for his remarks.

In response, Saudi Arabia, the United Arab Emirates, Kuwait, and Bahrain recalled their envoys from Beirut and expelled their Lebanese ambassadors. Saudi Arabia also banned all Lebanese imports into the kingdom in a big blow to Beirut’s already crippled economy. Bahrain and the UAE called on their citizens to leave the country, while Yemen has also since recalled its envoy from Beirut.

The Lebanese authorities have called for dialogue with their Saudi counterparts.

President Aoun has dismissed Kordahi’s comments and said they do not reflect the Lebanese government’s position.

But he clarified that he has not asked Kordahi to resign from office over the remarks. He added that Kordahi will act in Lebanon’s best interest.

“When a Saudi journalist insulted me on the air, no action was taken against him,” Aoun, whose Free Patriotic Movement party is in alliance with Hezbollah movement, added.

The Lebanese president on Monday met Qatar’s Emir Sheikh Tamim bin Hamad Al Thani during which they discussed the PGCC crisis, among other things.

Qatar, also a PGCC member, reportedly offered to mediate talks between the two sides. However, Al Jazeera could not independently verify the report.

The two talked about developments of mutual interest regionally and internationally, as well as ways to enhance bilateral relations.

Aoun also spoke about other issues, including the investigation into the 2020 Beirut port blast, and the role of the powerful armed Lebanese group Hezbollah.

Speaking about the investigation into the deadly Beirut port explosion, which took place on August 4, 2020, Aoun noted he did not agree with Hezbollah’s stance.

The group had repeatedly called for replacing Judge Tarek Bitar, who has been leading the investigations, over the allegations of “bias” that have been widely dismissed by rights groups and families of blast victims.

Last month, Bitar was forced to stop work for a third time over a lawsuit brought forward by a former minister who had been summoned for questioning.

Aoun also stated Lebanon’s central bank is under a criminal investigation. Luxembourg judicial authorities had opened “a criminal case” in relation to Governor Riad Salameh – who Aoun said is responsible for all the money lost.

The Lebanese pound has lost almost 90 percent of its value since late 2019 – the main driving force that has crushed the country’s economy which is now in tatters.

Earlier this year, the World Bank reported Lebanon’s economic and financial crisis could rank as one of the three severest the world has seen since the mid-19th century.

In the wide-ranging interview to the Doha-based network, the Lebanese president reiterated that parliamentary elections will be held as scheduled and that measures are being taken to organise the March 27 event.

Due to the ongoing political and economic crisis, as well as the controversial electoral law – which stipulates that Lebanon’s parliament is proportioned based on the state’s multiple religious and sectarian denominations – there has been speculation that the election could be postponed.