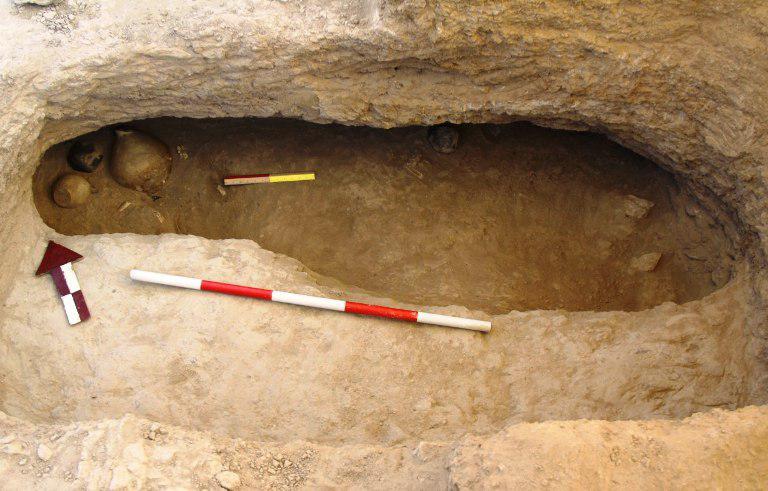 Archaeological excavations in a village in Isfahan province have led to the discovery of 12 graves, and remnants of the Bronze to Iron ages, grey pottery, and stone and agate beads.

Mohsen Javari underlined that there are some historical manipulations in eight graves, arguing that “the manipulations have taken place at the same time and probably in an attempt to acquire bronze objects.”

This Iranian expert underpinned that the discovered pottery has not been extracted from the manipulated graves.

“The cemetery had been used for 600 to 800 years, and relics from the Bronze Age to the Iron Age were discovered there. So far, we have also found two graves in the form of boots.”

This archaeologist said that the discovered items are graves, grey pottery, seals, beads made of stone and agate, and metal objects including spears, bracelets, earrings, and bronze pins.

Javari referred to the study of human and animal remnants and the classification of bones as a feature of this stage of exploration.

“Soon after the completion of excavations, with the presence of the explorers, the achievements of the third stage of the site’s exploration will be presented at a special meeting at the institute,” added Javari.

Javad Hosseinzadeh, another supervisor of the team, said that by carrying out experiments and genetic studies in the cemetery’s ground, cultural affiliations with Greater Khorasan and Turkmen samples were observed.

The researcher highlighted the DNA studies conducted at this ancient site and referred to the existence of ancient relics that are similar to those in the north-eastern part of Iran.

He also expressed hope that by comparative and genetic studies, a new approach to archaeological studies of the late Bronze and Iron Age of Iran could be found.